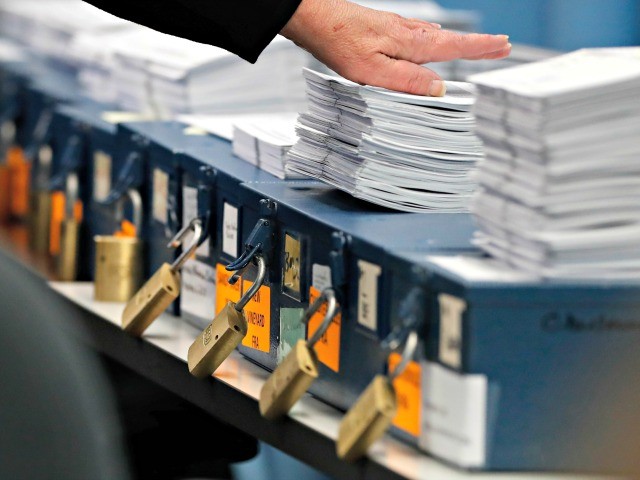 Poliquin and three voters filed the lawsuit after Maine’s “Secretary of State Matt Dunlap declared Democrat Golden the winner in the November 6 election [in Maine’s 2nd Congressional District] on November 15, despite the fact that Poliquin received 2,632 more votes than Golden on election day, due to the first-in-the-nation implementation of a controversial ‘rank voting’ system,” as Breitbart News reported.

Due to a 2016 referendum passed by Maine voters, the state adopted a “rank voting” system for federal elections in 2018. Under that system, second choice, third choice, and fourth choice votes cast by voters for the third place and fourth place candidate were split between Golden and Poliquin in a second round of vote calculations. Using that methodology, Golden won by more than 2,000 votes.

“Whether RCV is a better method for holding elections is not a question for which the Constitution has an answer,” U.S. District Judge Lance Walker, a Trump appointee, said in his 30 page decision, adding:

To the extent that the Plaintiffs call into question the wisdom of using RCV, they are free to do so but for the reasons that I have indicated previously and upon which I elaborate presently, such criticism falls short of constitutional impropriety. A majority of Maine voters have rejected that criticism and Article I does not empower this Court to second guess the considered judgment of the polity on the basis of the tautological observation that RCV may suffer from problems, as all voting systems do. The proper question for the Court is whether RCV voting is incompatible with the text of Article I by giving the language its plain and ordinary meaning.

Article I, Section 4 of the Constitution, known as “The Elections Clause,” describes the manner in which elections to the U.S. House of Representatives are to be held:

The Times, Places and Manner of holding Elections for Senators and Representatives, shall be prescribed in each State by the Legislature thereof; but the Congress may at any time by Law make or alter such Regulations, except as to the Places of chusing Senators.

In his opinion, Walker wrote that “Article I is perfectly silent as to a prescribed method by which the States must elect their representatives.”

Though Article 1 Section 4 specifically refers to the legislature of each state as the body that has the authority to prescribe that method, Walker asserts that the 2016 public referendum process by which the “rank voting” or RCV method became law in Maine is equivalent an act of the state legislature, citing recent judicial precedent:

Exercising the power vested in them by Article I, “[t]he people, in several States, functioning as the lawmaking body for the purpose at hand, have used the initiative to install a host of regulations governing the ‘Times, Places and Manner’ of holding federal elections,” Arizona State Legislature v. Arizona Indep. Redistricting Comm’n, 135 S. Ct. 2652, 2676 (2015), and the people of Maine are no exception.

The Supreme Court held in its five to four Arizona State Legislature v Arizona Independent Redistricting Commission decision in 2015 that “The Framers may not have imagined the modern initiative process in which the people’s legislative power is coextensive with the state legislature’s authority, but the invention of the initiative was in full harmony with the Constitution’s conception of the people as the font of governmental power.”

“It would thus be perverse to interpret “Legislature” in the Elections Clause to exclude lawmaking by the people, particularly when such lawmaking is intended to advance the prospect that Members of Congress will in fact be ‘chosen . . . by the People of the several States,’ ” the Court continued.

“[T]he Arizona Legislature sued the AIRC in federal court seeking a declaration that the Commission and its map for congressional districts violated the “Elections Clause” of the U. S. Constitution,” Justice Ruth Bader Ginsburg wrote in the majority opinion, in which Justices Sotomayor, Kagan, Breyer, and Kennedy concurred.

Though she conceded that “Direct lawmaking by the people was ‘virtually unknown when the Constitution of 1787 was drafted,’” Justice Ginsburg wrote that “our precedent teaches that redistricting is a legislative function, to be performed in accordance with the State’s prescriptions for lawmaking, which may include the referendum and the Governor’s veto. The exercise of the initiative, we acknowledge, was not at issue in our prior decisions.”

Ginsburg concluded, “we see no constitutional barrier to a State’s empowerment of its people by embracing that form of lawmaking.”

But writing in the dissenting opinion, in which Justices Thomas, Alito, and Scalia concurred, Chief Justice Roberts identified numerous constitutional barriers to this “direct lawmaking by the people” in Article 1, Section 4 of the Constitution.

“Just over a century ago, Arizona became the second State in the Union to ratify the Seventeenth Amendment. That Amendment transferred power to choose United States Senators from “the Legislature” of each State, Art. I, §3, to ‘the people thereof.’ The Amendment resulted from an arduous, decades-long campaign in which reformers across the country worked hard to garner approval from Congress and three-quarters of the States,”  Chief Justice Roberts wrote.

“What chumps! Didn’t they realize that all they had to do was interpret the constitutional term “the Legislature”to mean “the people”? The Court today performs just such a magic trick with the Elections Clause. Art. I, §4,” he continued. (emphasis added)

“The Court seems to conclude, based largely on its understanding of the “history and purpose” of the Elections Clause . . . that “the Legislature” encompasses any entity in a State that exercises legislative power. That circular definition lacks any basis in the text of the Constitution or any other relevant legal source,” Chief Justice Roberts added:

[E]ven under the majority’s preferred definition, “the Legislature” referred to an institutional body of representatives, not the people at large.

Any ambiguity about the meaning of “the Legislature” is removed by other founding era sources. “[E]very state constitution from the Founding Era that used the term
legislature defined it as a distinct multimember entity comprised of representatives.” . . .

The Constitution includes seventeen provisions referring to a State’s “Legislature.” . . . Every one of those references is consistent with the understanding of a legislature as a representative body. More importantly, many of them are only consistent with an institutional legislature—and flatly incompatible with the majority’s reading of “the Legislature” to refer to the people as a whole.

“The ‘one person, one vote’ principle is well established under the law,” Walker wrote.

They understood that a majority victory  was the standard to avoid a second round of ballot counting. At round one of the RCV  election, they cast votes of equal weight, but their candidate failed to achieve a majority victory. At round two, votes cast for the two trailing candidates were reviewed to see  whether they expressed a preference for the remaining, viable contestants. Defendant Dunlap distributed those votes that were earmarked to either Plaintiff Poliquin or  Intervenor Golden. Plaintiffs’ votes were not rendered irrelevant or diluted by this process. They remained and were counted.

Walker’s decision did not, however, appear to directly address whether the principle of “one person, one vote” was applied to the more than 8,000 voters in the 2nd Congressional District whose votes were discarded in the second round because they voted for either the third place or fourth place candidate in the November 6 election, and did not list second, third, or fourth choices.

Judge Walker was nominated to the federal judiciary by President Trump in April 2018 by Sen Susan Collins (R-ME) and Sen. Angus King (I-ME). He was confirmed by the Senate in a voice vote on October 11, 2018.

As of late Thursday, neither Poliquin nor any of the other three plaintiffs had commented on whether they intend to appeal the decision, as the Press Herald reported:

It was unclear Thursday whether Poliquin or the three other plaintiffs in the case – all 2nd District voters – would appeal the decision to the U.S. Court of Appeals. In a statement posted on Twitter, Poliquin once again suggested that many Mainers were confused by the ranked-choice process and alluded to unsubstantiated claims of a small number of wrong ballots being distributed at some polling places. But the Republican did not indicate directly whether he will appeal.

“From the beginning, I’ve made it clear this Constitutional voting rights issue goes far beyond one election,” Poliquin tweeted. “Now that Maine voters have experienced the complicated and confusing Rank Voting in a real general election, it’s more important than ever to ensure that every Mainer is able to cast his vote legally and fairly.”

Golden’s campaign said it was clear with each passing day that the Democrat Golden “is the unquestionable winner” of the race to represent Maine’s rural, sprawling 2nd Congressional District.

Any appeal will be filed with the United States Court of Appeals for the First District.

Secretary of State Matt Dunlap, a Democrat, began a recount of the election results on December 6, at the request of Poliquin.

Originally expected to take four weeks, the recount has been proceeding faster than expected, and could be completed before the 116th Session of Congress convenes in Washington, D.C. on January 3.