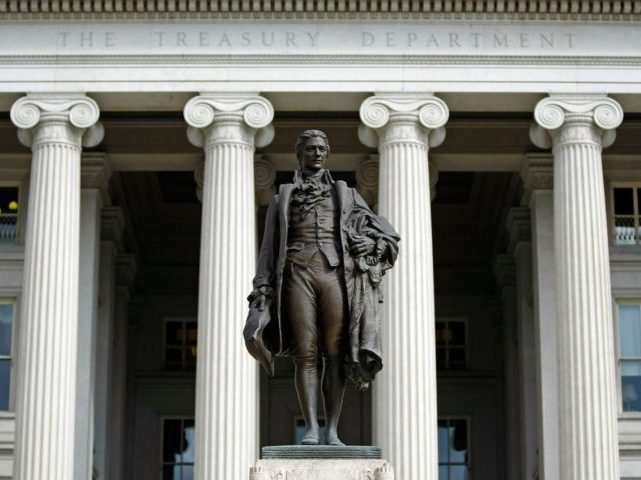 The federal budget deficit grew to $770 billion in fiscal year 2018 as spending lept upward and tax revenue came in only slightly higher than the prior year.

Administration officials said the deficit, the highest since 2012, was up due to greater federal spending, including a larger military budget increases. Despite the $1.5 trillion package of  business and household tax cuts authorized last year, federal revenues were up by 0.4 percent from fiscal year 2017.

Economists’ opinions vary when it comes to the effects of deficits. Some establishment economists have long claimed, with little evidence, that deficits are long-term drags on the economy. They say government borrowing can crowd out private-sector borrowing. But others, particularly those associated with the Modern Monetary Theory school, say that the only real risk from budget deficits is higher inflation that can emerge when the government’s spending claims too large a share of the economy’s resources. In that case, the government may have to cut spending or raise taxes to control inflation.

At least so far, the larger deficit has not weighed on the economy. There are no signs that private sector borrowing has been crowded out by federal bond issuance. Inflation expectations are still very low, whether judged by consumer surveys or market-based indicators such as inflation-protected bonds. Long-term interest rates have moved up slightly in recent weeks but show no signs that investors expect inflation to rise.

The 2018 deficit is 17 percent above the prior year’s $666 billion. But the tax cuts have only been in place for nine-months, so their full effects are likely not yet reflected in the 2018 figures. Predictions from Trump administration officials that the tax cuts could pay for themselves were predictions based on long-term economic growth, not meant to play out in the first year or two of the tax cuts.

Critics of the president’s extraordinarily popular economic policies said the numbers released by the Treasury show the tax cuts are driving up the budget deficit. But federal spending increased 3.1 percent compared with the prior year, to $4.1 trillion. And despite the tax cuts, tax revenue continued to grow, albeit at a slower pace than in recent years. In other words, if not for the increased spending, the budget deficit would have fallen.

It is likely that if tax rates had remained at past levels, revenue would have grown by even more due to the strong performance of the economy in 2018. Although it is not clear by how much since the effect of the tax cuts in driving that growth is not known with any certainty. What’s more, the deficit itself likely acts as a stimulus to the economy, which means that growth might have been lower and unemployment higher without it.

The government did lay claim to a smaller share of the private sector’s income in 2018. As a share of the economy, federal revenues dropped to 16.5 percent, down from 17.2 percent the year before. That means federal taxes now claim a full percentage point less of the economy than the average for the last 40 years, according to the Treasury Department.

When the budget deficit rises, it means the government is financing a larger fraction of its spending through bond sales to volutary purchasers seeking savings vehicles. These sales allow savers to exchange the shortest term government obligations, dollars, for longer term bonds.

A smaller deficit requires the government to finance a larger fraction of its spending through taxes, which means the government collects the dollars from the private sector without providing any longer-term security in exchange.