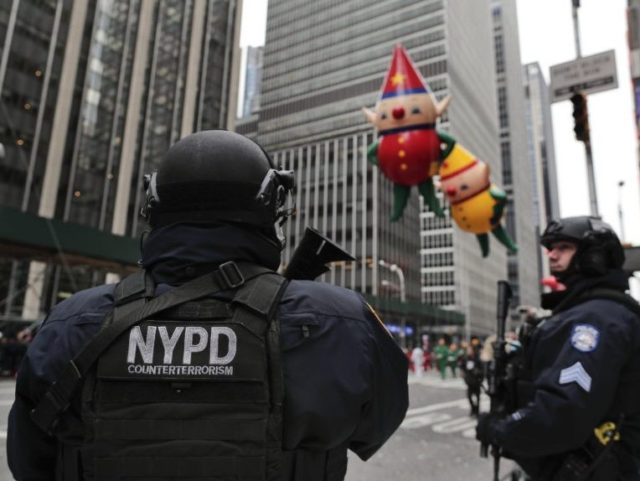 Federal authorities in charge of national security told Breitbart News this week there are no specific or credible threats around the Thanksgiving holiday, but they urged Americans to remain vigilant as an unprecedented number of people take to the road and sky for the celebrations.

In statements to Breitbart News, both the FBI and the U.S. Department of Homeland Security (DHS) reassured nervous Americans that America’s security services are ready to deal with terrorist threats.

McLaurine Klingler, a spokeswoman for DHS, noted that federal authorities treat high-profile events that attract a large number of visitors, such as the annual Macy’s Thanksgiving Day Parade in New York, “as potentially vulnerable targets and with a higher level of sensitivity and attention,” adding:

DHS works diligently with our federal, state, and local partners to identify and mitigate any threats to the homeland throughout the entire year … The men and women of DHS work closely with local law enforcement entities across the country to secure a number of high-profile events and ensure the safety and security of all those participating in those celebrations.

As always, DHS encourages vigilance by the public to report any suspicious activity to law enforcement. An informed, vigilant, and engaged public remains one of our greatest assets to identify potential terrorists and prevent attacks.

Breitbart News learned from the FBI that the U.S. is not currently facing any specific or credible threats.

“The FBI is not aware of any specific and credible threats around the Thanksgiving holiday. The FBI regularly assesses intelligence regarding possible threats to the U.S. and will continue to work closely with our federal, state, and local law enforcement partners should there be any potential threat to public safety,” an FBI spokesperson who chose to remain anonymous declared in a statement.

Echoing DHS, the FBI urged “members of the public to maintain awareness of their surroundings and to report any suspicious activity to law enforcement.”

Since 2015, DHS has published the National Terrorism Advisory System Bulletin to spotlight to the American public the continuing terror threat facing the U.S. homeland.

The latest bulletin, issued on September 14 and expiring on January 18, also suggested the U.S. is not facing any credible, specific, or impending terrorist threat for the Thanksgiving holiday.

We continue to face one of the most challenging threat environments since 9/11, as foreign terrorist organizations exploit the internet to inspire, enable, or direct individuals already here in the homeland to commit terrorist acts. Homegrown terror suspects increasingly rely on technology, such as end-to-end encrypted social media applications, to avoid detection.

Terrorist groups are urging recruits to adopt easy-to-use tools to target public places and events. Specific attack tactics have included the use of vehicle ramming, to include the use of rental vehicles, small arms, straight-edged blades or knives, homemade explosives, and poisons or toxins.

In the advisory, DHS warned that some terrorist groups are seeking to employ new technologies and tactics, such as drones and chemical agents. Moreover, the department acknowledged that although terrorists have not used a commercial airplane to attack the U.S. since 9/11, they “continue to target commercial aviation and air cargo, including with concealed explosives.”

According to the Transportation Security Administration (TSA), a component of DHS, Thanksgiving will mark the busiest-ever travel season at airports with an estimated 25 million passengers expected to go through security checkpoints.

“We’re ready,” he added, referring to additional staff, canine officers, technology, and equipment that will assist officers in processing people through airports.

Consistent with the warnings from DHS, the TSA administrator warned, “The threats to aviation security are persistent. They are no less than they were in the 2002-2003 time frame. Please don’t assume that because you don’t hear about aviation threats in the media all the time like you might have immediately following 9/11. Those threats are very much still there.”