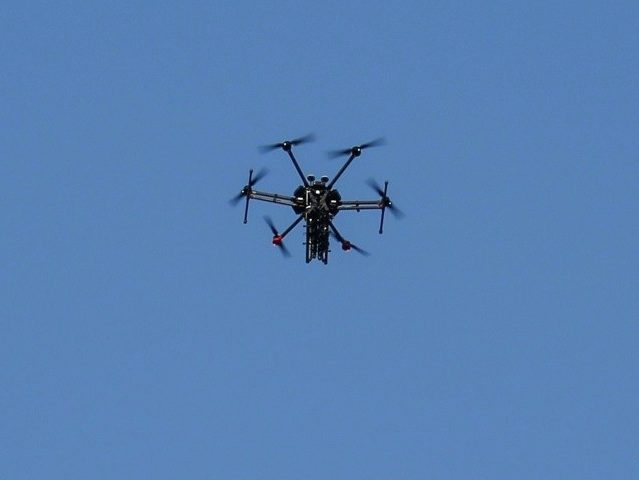 WASHINGTON, DC — The United States is facing an “escalating” threat from the use of civilian drones as weapons by the likes of the Islamic State (ISIS/ISIL) and MS-13, the FBI director cautioned on Wednesday.

The threat from Unmanned Aircraft Systems [UAS] in the U.S. is steadily escalating….While there has been no successful malicious use of UAS by terrorists in the United States to date, terrorist groups could easily export their battlefield experiences to use weaponized UAS outside the conflict zone. We have seen repeated and dedicated efforts to use UAS as weapons, not only by terrorist organizations, such as ISIS and Al Qa’ida, but also by transnational criminal organizations such as MS-13 and Mexican drug cartels, which may encourage [the] use of this technique in the U.S. to conduct attacks.

The FBI assesses that, given their retail availability, lack of verified identification requirement to procure, general ease of use, and prior use overseas, UAS will be used to facilitate an attack in the United States against a vulnerable target, such as a mass gathering.

According to the FBI, the MS-13 gang maintains a presence in at least 42 states in the District of Columbia and counts with the support of “about 6,000-10,000 members nationwide.”

While describing shifts in the threat landscape more than 17 years after the 9/11 attacks on the United States, U.S. Department of Homeland Security Secretary Kirstjen Nielsen identified the use of civilian drones to advance nefarious activities as an example of emerging threats that are outpacing America’s defenses.

The DHS secretary, who appeared alongside FBI Director Christopher Wray at the hearing, told lawmakers via written testimony:

Terrorists are using drones on the battlefield to surveil and to destroy; drug smugglers are using them to monitor border patrol officers so they can slip into America undetected; and criminals are using them to spy on sensitive facilities. The threat is real, and they can be used for a wide array of nefarious purposes.

Russell Travers, the acting director of the National Counterterrorism Center (NCTC), a component of the Office of the Director of National Intelligence (ODNI), also highlighted the menace posed by the use of drones as weapons while testifying alongside Wray and Nielsen.

Travers noted in his written testimony:

We are particularly concerned by their ongoing and future weaponization of more secure forms of communication, social media, unmanned aircraft systems (UAS), and weapons of mass destruction…an increasing number of terrorist organizations are making use of UAS for reconnaissance and surveillance, and we believe the use of this technology for kinetic operations will only grow.

Nielsen noted that until recently the federal government lacked the authority to combat the growing threat posed by drones, officially known as unmanned aerial systems (UAS).

Unfortunately, outdated laws have prevented us from setting up the sophisticated countermeasures we need to protect significant national events, federal facilities, and other potential targets from an airborne menace. DHS has lacked the clear legal authority to track and identify dangerous drones—and to neutralize them effectively if they are determined to be a threat.

Furthermore, we have not been able to test many of the crucial countermeasures we need in real-world environments where the risks exist.

According to Nielsen, the FAA [Federal Aviation Administration] Reauthorization Act of 2018, signed into law by U.S. President Donald Trump this week, will help DHS secure the authorities it needs to combat the drone threat.

“It will give us the ability to better protect Americans against unmanned aerial threats. We have already begun planning in earnest for how to best deploy these authorities and defensive technologies to defend the United States against this emerging danger,” she explained, referring to the measure.

The U.S. government has also deemed transnational criminal organizations like Mexican drug cartels and MS-13 a prominent menace against the U.S.