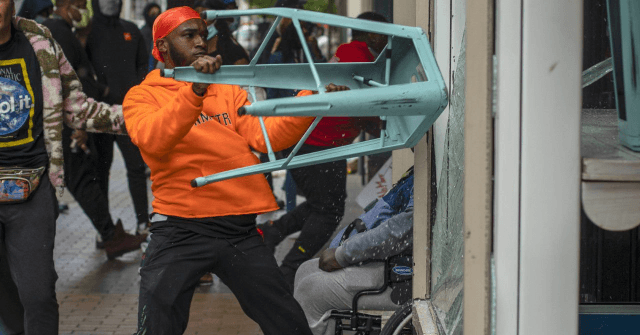 A man was arrested Thursday for allegedly vandalizing Colossal Cupcakes in Cleveland, Ohio, during George Floyd protests on May 30.

The Federal Bureau of Investigation (FBI) said 22-year-old Tandre Buchanan Jr. was one of four suspects seen in surveillance footage and images taken at the scene, according to Fox 8.

“Several businesses were damaged, including Colossal Cupcakes. Staff there hid in the bathroom as looters broke in the front windows. Owner Kelly Kandah said everything was either gone or destroyed after the incident,” the report noted.

Thirty minutes after FBI agents released the footage and images to the public on Wednesday, they received multiple calls from people who identified Buchanan as one of the suspects, according to Cleveland.com.

Agents said Buchanan used a stool to “repeatedly smash through the store’s windows. Several others are accused of looting the store, and there were at least three others with Buchanan at the time,” adding that they were still searching for the other suspects.

Authorities took Buchanan into custody at his place of employment in Garfield Heights on Thursday, and he was later scheduled to appear in court Friday.

Following his arrest, Special Agent in Charge Eric Smith said the suspect “violated the rights of a fellow Clevelander by breaking into her business, destroying her property and terrifying her and her employees as they hid inside.”

“The FBI commends the public and the media for quickly identifying Buchanan in the surveillance photos disseminated. Law enforcement will ensure that those that destroyed parts of our city are held accountable,” he continued.

Following his arrest, Buchanan faced charges of interference with commerce by threats or violence, according to Fox 8.

On Facebook May 31, Kandah thanked her friends and customers for their support and vowed to reopen soon:

Colossal Cupcakes tweeted June 5 that it had not abandoned plans to open its second location at the end of the month:

The new Colossal at 4615 Great Northern Blvd in North Olmsted will STILL be opening at the end of the month as planned. Announcement on the downtown store coming soon.