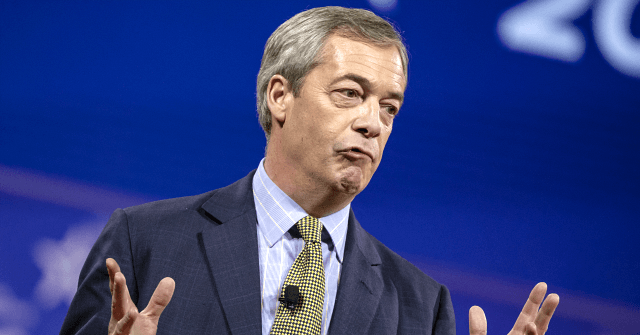 Brexit Party leader Nigel Farage has warned of the “first betrayal” of Brexit, following reports that the government has reversed a decision to impose border customs controls after the UK leaves the EU’s Customs Union.

Businesses have reportedly pressured the government into abandoning plans for full border checks on January 1st, 2021, after the Brexit transition period has expired.

“We recognise the impact that coronavirus has had on UK businesses,” a Whitehall official told the Financial Times on Thursday. “As we take back control of our laws and borders at the end of this year, we will take a pragmatic and flexible approach.”

Border officials will instead conduct only ‘light-touch’ checks on a temporary basis at ports like Dover. Even with a free trade agreement in place, the government would have to put customs checks at the borders. However, the FT reports the measures would be put in place whether the UK has a trade deal with the EU or trades with the bloc on World Trade Organization (WTO) terms.

The first betrayal, this is a very bad sign. pic.twitter.com/RtYQIDqT3B

Sources speaking to the financial newspaper said that the official announcement could come as early as Friday.

“The first betrayal. This is a very bad sign,” Mr Farage wrote on Friday.

Brexit Minister Michael Gove had said in February that the UK, free from the bloc, would treat EU goods in the same manner as imports from other countries, and vowed “to keep our borders safe and secure”. The pledge had also signalled to Brussels that London was serious about the UK being fully independent.

Despite the UK giving EU goods the soft-touch upon entry, there has yet been no sign that the EU will reciprocate and take a relaxed approach to British goods entering the bloc.

The British government also said in February has said that if significant progress were not made by the end of June, it might pull out of negotiations and spend the rest of the transition period planning for a WTO exit. One would assume that to be the next move, with the EU’s negotiator Michel Barnier saying last week that no progress has been made after four rounds of negotiations.

However, reports have suggested that to-date fruitless negotiations could drag on well into summer, with weekly talks set to take place until the end of July — signalling another Brexit red line the government has failed to stand behind.