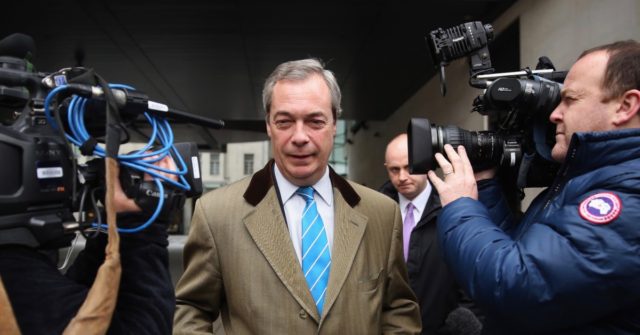 Brexit Party leader Nigel Farage said that he is not “the least bit surprised” by a poll which found that trust in the mainstream media, notably the BBC, has dramatically fallen amongst people on the left and right of the political spectrum.

A report by The Reuters Institute for the Study of Journalism found that just 28 per cent of British respondents said they trusted the mainstream media most of the time, a fall of 22 per cent since 2016.

Trust of the BBC has fallen amongst those who describe themselves as “very left-wing” or “very right-wing”, has dropped 20 per cent over the past two years, with just 47 per cent saying they trust the information from Britain’s public broadcaster, down from 67 per cent in 2018 and 63 per cent in 2019.

Commenting on the damning report, Mr Farage said: “I’m not in the least bit surprised by this because just look at what’s happened over the past couple of weeks.”

“Whenever I turn on the BBC, it could be Channel 4, it could be Sky, it doesn’t matter… we are completely bombarded by a narrative that somehow we are awful, terrible, backward, knuckle-dragging, racist people, and we should be deeply ashamed. Not just of who we are today, but everything we’ve ever stood for as a nation. That message, that narrative is coming out of mainstream media constantly, day on day on day,” he lamented.

Public trust in UK news coverage has fallen to among the lowest levels globally. That’s what happens when you go woke. pic.twitter.com/e2FaypGawA

While not officially confirming, Mr Farage suggested that his departure from his LBC radio show was as a result of a campaign by leftist activists attacking advertisers — as has been the case for Fox News host Tucker Carlson — after the Brexit leader compared the Black Lives Matter movement to the Taliban over their iconoclastic push to destroy historical monuments.

“I will say I’m very disappointed, I will say I put my heart and soul into that for the last three and a half years, but I’m not going to get into a row, that’s unseemly. I’m just going to get on and move on with my life. But you might imagine that what is going on in this country is much the same that is happening to Tucker Carlson. Advertisers are being bombarded with tens of thousands of emails from people who would probably never buy their products anyway,” Farage said.

“The gap between mainstream media and where ordinary folk in this country are has never been wider, it will get filled, it will be the online subscription model. I suspect it will be the online, by whatever means, that will close it, and it needs to happen because free speech is under threat,” he concluded.

The dramatic fall in trust for the media establishment in Britain comes as a Twitter campaign to #DefundTheBBC has gained over 70,000 supporters in little over a week.

The campaign was launched following an intense backlash against the allegedly ‘impartial’ reporting from the public-funded broadcaster on the Black Lives Matter protests, which was characterised as “largely peaceful” despite widespread reports of violence committed against police officers by leftist agitators.

Delingpole: The Mainstream Media Are Bought, Paid for – and Doomed! https://t.co/7zlgcauFnI