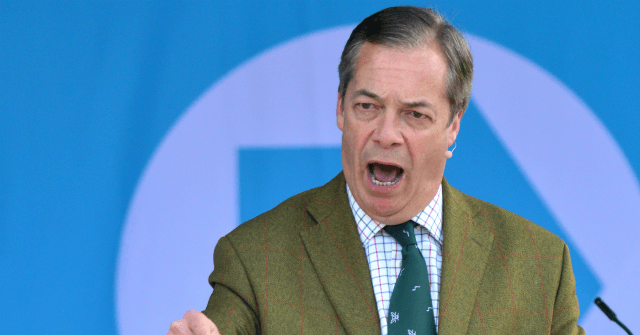 Nigel Farage has blasted hard-left Labour leader Jeremy Corbyn over his “catastrophic week” where he snubbed President Donald Trump’s State banquet and for his party being hit by yet another antisemitism allegation.

Mr Farage attacked Mr Corbyn’s hypocritical decision to snub President Trump’s visit, despite having met with several dubious leadership figures in the past, saying on his LBC radio show on Sunday: “How can you boycott a State banquet with Donald Trump when you’ve previously been to one with President Xi of China?”

Farage then called out Corbyn for further hypocrisy as it was reported that the Labour leader, despite leading a protest against President Trump, had actually requested a meeting with him; however, President Trump declined the invitation.

“How can you stand on the hustings in Trafalgar Square effectively calling Trump a racist and goodness knows what else, and then request to have a meeting with him?” Mr Farage said.

Discussing the recent European Parliament election results, the Brexit Party leader commented on the rise of the Liberal Democrats which last month beat the Labour Party into third place and even polled ahead of them in a General Election poll at the end of May. Labour has been losing ground to a resurgent Liberal Democrat party which has a clear, pro-Remain position that appeals to voters wishing to reverse the decision to leave the EU.

Farage said: “I would argue the rise of the Liberal Democrats is a catastrophe for Corbyn and the Remain side of his party, and equally the rise of the Brexit Party is also very damaging to him.”

That the Brexit Party is a threat to Labour was evident in the recent Peterborough by-election in which Labour only narrowly held on to their seat by 683 votes over the Brexit Party which were standing in their first national election, being formed only eight weeks ago.

Labour have been plagued by issues and accusations of antisemitism in the party since Mr Corbyn took over the leadership. The latest scandal involved the newly-elected Peterborough MP who had reportedly ‘liked’ a post on Facebook claiming Theresa May was pursuing a “Zionist slave masters agenda”. She also commented positively on a thread that alleged that Mossad was responsible for creating Islamic extremists.

The Jewish Labour Movement took the step of demanding the party whip be withdrawn from the newly elected Lisa Forbes within hours of the Labour victory being declared.

“Whatever trouble the Conservative Party may be in, this man does not look like a prime minister to me in any way, shape, or form,” Mr Farage said.