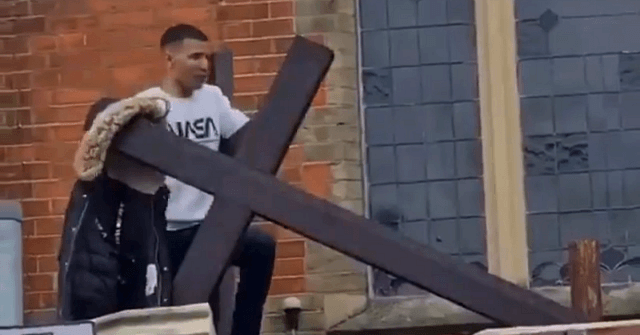 Brexit Party leader Nigel Farage has weighed in on the viral video of a man ripping down the cross on a London church in broad daylight, warning Britain’s Christian culture is “under assault”.

The video shows the cross on the Chadwell Heath Baptist Church in east London being hauled down by a young man making no attempt to conceal his identity, despite the widespread acceptance of people wearing masks in public and the presence of several witnesses.

The Metropolitan Police say the fallen cross has been recovered and a male was arrested at the scene on suspicion of criminal damage. No mention was made of pursuing religiously-aggravated hate crime charges.

“We are a Christian country and our culture is under assault,” commented Farage, sharing the video on social media.

“Our archbishops are complaining about Brexit yet say nothing about the desecration of a London church,” he added.

We are a Christian country and our culture is under assault.

Our archbishops are complaining about Brexit yet say nothing about the desecration of a London church.

The bill was drawn up after government ministers became concerned that the European Union intended to abuse measures in the Brexit Withdrawal Agreement (WA) to prevent food from being imported from Great Britain to the British province of Northern Ireland if, as looks increasingly likely, the ongoing Brexit-in-name-only “transition period” expires at the end of 2020 without a formal trade UK-EU trade agreement being struck.

The WA leaves Northern Ireland partly within the EU’s regulatory ambit in the event of a “No Deal”, in order to main the supposedly all-important open border between Northern Ireland and EU member-state the Republic of Ireland — but the British government did not anticipate that the EU would interpret this in such a way as to allow them to blockade the transport of food from one part of the United Kingdom to another.

Consequently, the Internal Market Bill is intended to give British government ministers the power to “disapply” elements of the WA if it is used in this way — a move the EU and its British apologists — including the increasingly politicised Church of England — have decried as a breach of international law.

“We believe this would create a disastrous precedent,” the Anglican clerics’ letter complains.

“If carefully negotiated terms are not honoured and laws can be ‘legally’ broken, on what foundations does our democracy stand?” they add, as though allowing the EU to control trade between different parts of the United Kingdom in order to uphold the sanctity of a foreign treaty would be more democratic than allowing Britain’s duly elected representatives amend or leave that treaty to uphold the national interest.

Former Brexit minister Steve Baker MP responded to the intervention by saying that he was “extremely disappointed that the archbishops are sowing disunity and division at a time when they could instead build up much-needed harmony in our nation,” adding: “I pray that the archbishops might be blessed with better legal advice. They would then realise the hysterics of various lawyers are not justified.”

Former Conservative Party leader Sir Iain Duncan Smith MP was far more cutting, remarking acidly:  “I hope this is not a distraction from the difficulties the Church of England has been in with the inquiry into Child Abuse, which reported back last week.

“I hope this is not an attempt at distraction from the Church of England’s own internal troubles.”