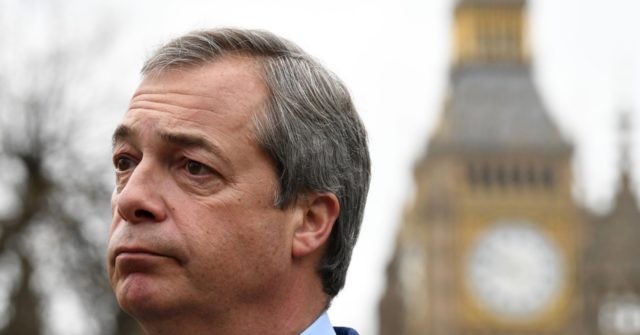 Brexit Party leader Nigel Farage said that senior politicians are burying their “heads in the sand” on the issue of illegal migration, as record waves of migrants pour into the country by illegally crossing the English Channel.

Following the release of his exposé film, which uncovered a hotel in the West Midlands housing asylum seekers while refusing to book native Britons, Mr Farage said that the government’s blasé attitude towards the growing migration problem is the “height of irresponsibility even in good times”.

“With a global recession essentially upon us, British citizens will want to know what Boris Johnson and his Cabinet colleagues have to say about this appalling state of affairs. I will do my best to force a proper public debate about it,” the Brexiteer wrote in The Telegraph.

Mr Farage acknowledged that Home Secretary Priti Patel is likely “frustrated by this situation”, but went say that as a part of the Brexit negotiations with the EU, Mrs Patel must convince Prime Minister Boris Johnson and other members of the cabinet to ensure that the Home Office is given the power “to return immediately to France anybody who has entered the United Kingdom illegally if they have come via the Channel”.

“A Conservative government that was able to tackle this situation effectively would split the Labour Party in two and garner huge public support. And if any parliamentarian thinks that this problem has been exaggerated, I would urge them to join me on the streets of Middle England so that they can hear for themselves what the voters think,” Mr Farage offered.

On Saturday, Mr Farage released exclusive footage of several migrants sunning themselves and drying their clothes on the beach at St Margaret’s Bay, near Dover in Kent, after crossing the English Channel from France in a small rubber dinghy.

On Friday, UK Border Force intercepted nine boats in the Channel, bringing the 96 migrants ashore, who claimed to hail from Iran, Syria, Iraq, Eritrea, Kuwait, Afghanistan, and Sudan, according to the BBC.

Since the start of the year, there have been a record 3,583 migrants documented to have reached the UK in small boats illegally, compared to 1,890 for the entirety of last year. On Thursday alone, a record 202 migrants were brought ashore after travelling in 20 boats. However,  the number “could be even higher because the Border Force records only include intercepted boats” the Daily Mail reported.

Following his discoveries about the migrant housing, Mr Farage warned: “When, finally, a claim is rejected, the vast majority of illegal immigrants simply disappear into the hidden economy. For many, this will result in them entering a life of effective slavery, as has been exposed recently in Leicester and at several farms around the country. This is a situation which shames modern Britain.”

“A particularly troubling aspect of this state of affairs is that the overwhelming number of people who arrive in Dover do not produce any identification documents. This not only makes it impossible to send them back to their home country, it also raises huge security concerns. In the last few weeks, fatal attacks have been carried out by asylum seekers in Glasgow and Reading. Many people told me they have never seen such active policing in the area,” Mr Farage reported.

This week, the Home Office blamed “activist lawyers” for stymieing the government’s attempts to deport migrants back to France, saying pro-migrant lawyers have launched “vexatious” legal claims in order to slow down the deportation process. According to the Press Association, the Home Office also said that the current asylum regulations are “inflexible and rigid” and “not fit for purpose”.

Between the beginning of 2018 and May of this year, there have just been 155 migrants deported from the country.