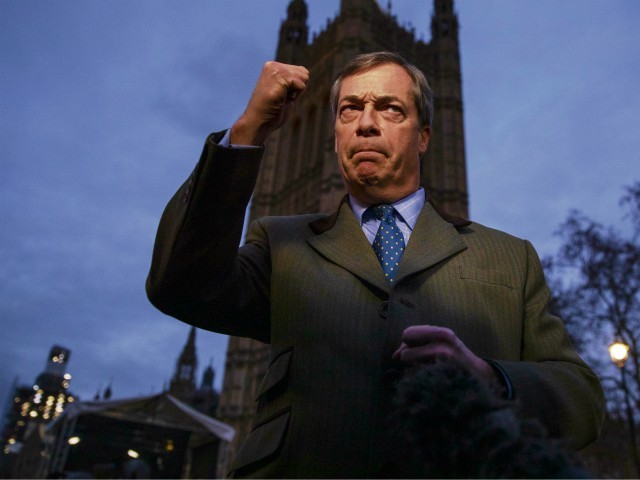 Brexit campaigner Nigel Farage has said he doubts Prime Minister Theresa May’s withdrawal agreement will pass in the House of Commons, while a poll has revealed voters reject the deal two to one.

After the prime minister announced that the vote on the agreement would be postponed in the face of certain defeat she travelled to Europe on Tuesday in attempts to seek “assurances” over the Irish backstop which could lock Northern Ireland into regulatory alignment with the EU.

Mr Farage, who branded it the “worst deal in history,” told Sky News’s Adam Boulton, “Now we see Mrs May charging all around Europe, I’m beginning to wonder why. Clearly, there’s going to be no significant concession of any kind at all I just don’t see how this deal gets passed.”

“She said yesterday repeatedly in her Commons statement she is seeking ‘assurances’ and ‘reassurances’ about the backstop and our ability to leave it.

“But everything you’ve heard today from Verhofstadt, from Juncker, from Tusk, they’re all saying that the withdrawal agreement is not up for negotiation,” the former UKIP leader added, after the three leading Eurocrats said that there would be no further negotiation on the backstop.

“I just don’t see how this deal will pass” – @Nigel_Farage on @SkyNews pic.twitter.com/6SqAiM3PsV

“The very best she can get Thursday night is a form of words around it that won’t be legally binding.”

The veteran Eurosceptic’s observation came as a Lord Ashcroft survey found that voters reject May’s agreement two to one, and in a majority amongst Labour, Conservative, Liberal Democrat, Leave, and Remain voters.

When asked whether they think MPs should vote to accept the deal as an “imperfect compromise,” 24 per cent of all voters agreed, whereas 53 per cent said that lawmakers should reject it (24 per cent did not know).

‘The will of the people is being betrayed.’

In a heated debate, former UKIP leader @Nigel_Farage says the #Brexit vote is not being abided by. pic.twitter.com/UGsvpBWMBd

In a heated exchange earlier on Good Morning Britain, Mr Farage had said, “The will of the people is being betrayed by an out-of-touch elite backed up by their big business friends.”

Lord Ashcroft’s poll also revealed that, again, in the majority amongst Labour, Liberal Democrat, Conservative, Leave, and Remain voters, people did not believe the agreement respected the spirit of the referendum with only 19 per cent overall thinking that it did.