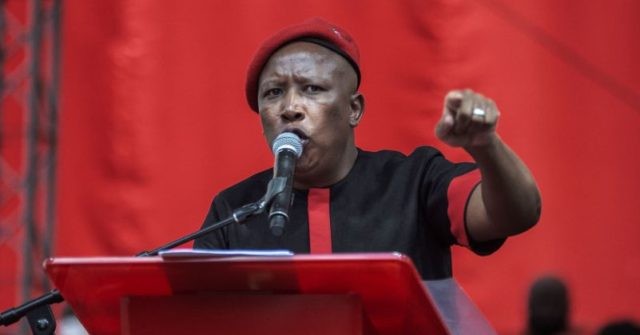 The leader of the far-left Pan-African Economic Freedom Fighters (EFF) Julius Malema is embroiled in an ongoing hate-speech court case over the alleged anti-white “Kill the Boer” chant used by South African extremists.

AfriForum, a South African non-governmental organization (NGO) that advocates largely for the rights of Afrikaans — the white descendants of South Africa’s Dutch settlers — has taken Julius Malema to court under grounds of hate speech after multiple members of his party sang a chant of “kill the Boer/Dubul’ibhunu” on several occasions.

The pro-Boer NGO argues that this song has had a direct effect on increasing the number of notorious farm attacks on white farmers in the “Rainbow nation”, which they believe are motivated by anti-white racist beliefs.

Malema, on the other hand, insisted to Judge Edwin Molahlehi that the chant doesn’t inspire violence, “criminality does”, and that the farmers are only targeted by his movement as they are the face of the opposition against forced land redistribution. Radical Pan-Africans like Malema believe all land owned by white people in Africa should be given to black people as they view it as stolen.

The radical EFF leader also claims that while his supporters chant “Kill the Boer”, he claims he no longer sings it and instead chants “Kiss the Boer”, which he claims has a different meaning. Others, however, claim that this is simply a dog whistle.

The decision to change the slogan from “kill” to “kiss” for some came after a ruling in 2011 by the Johannesberg Equality Courts in 2011 that branded the slogan “shoot the Boer” as hate speech. At the time Malema was the African National Congress’ (ANC) Youth Leader but was later kicked out after he initially kept singing the song.

During the Johannesburg trial, advocate Mark Oppenheimer, who represented AfriForum, has highlighted the trauma faced by white farmers when they hear the chant, South African digital newspaper the Daily Maverick reports.

“The testimony from them was that when they hear chants like ‘Kill the Boer’, that brings back those memories of real trauma… and you have taken the position… that only your pain matters. That strikes me as a failure of humanity”, Oppenheimer said, lambasting Malema in the courtroom.

Malema also admitted that he views white people as a collective group, not as individuals, which warrants them to be “punished for the sins of their parents”.

The radical EFF leader additionally failed to rule out calling for the “slaughter of white people“, saying in the courtroom “that it could be me yes, but it may not be me”.

Despite engaging in these racist viewpoints, Malema complained to the judge that he was being treated unfairly, as he was being quizzed by someone who “promotes racism”.

“And then you come here and want to accuse me, a victim of racism, of being a racist? That is insulting. Madiba [Nelson Mandela] coerced us into reconciling with people who we have never been one with [sic]. That was a myth. It is unrealistic, you can’t reconcile if you’ve never been together”, Malema proclaimed to the courtroom.

This happened outside the High Court in Johannesburg today. EFF supporters first tried to prevent us from leaving the premises, then they started chanting “Kill the Boer”, then they tried to steal my phone. pic.twitter.com/q9LeNM0G2C

Malema has publicly noted, however, that he will accept the Equality Court’s ruling if they decide that the term “Kill the Boer” is classified as hate speech.

At one point supporters of the EFF crowded the exit as AfriForum leaders left the court and chanted “Kill the Boer” at them. There have been no reports in the media of any arrests as a result of this incident.

The trial is still ongoing.