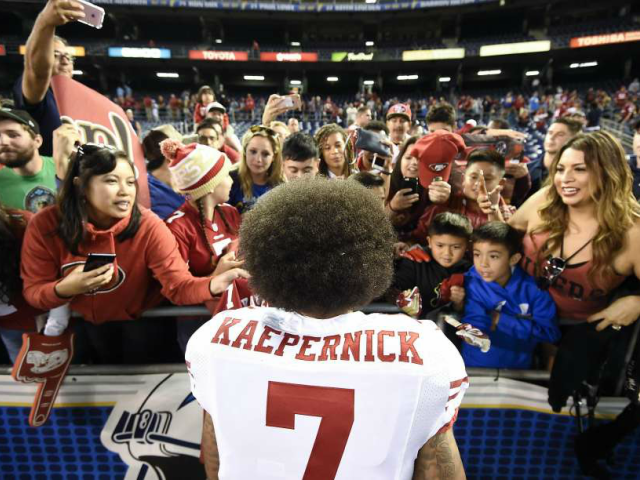 Some San Francisco 49ers fans are calling for a return engagement for Colin Kaepernick, after the team’s star quarterback Jimmy Garoppolo, went down with a knee injury on Sunday.

The 49ers reported on Monday that Garoppolo will need season-ending knee surgery after an MRI confirmed that he tore his ACL during the team’s loss to Kansas City on Sunday.

The 49ers also announced that backup C.J. Beathard would be taking the lead for the foreseeable future. But Garoppolo’s injury spurred another player, Marcus Cromartie, to tweet out that Kaepernick would be the ideal replacement, Fox News reported.

The last time Kaepernick played pro football was back during the 2016 season.

Still, Cromartie was not alone, and the suggestion that the 49ers take Kaepernick back on began populating Twitter as fans learned of Garoppolo’s injury.

If it turns out that the Jimmy Garoppolo injury is as bad as we fear, the #49ers can always bring back Colin Kaepernick.

Bet the 49ers wish they had Colin kaepernick now

At what point do the @49ers consider reaching out to Kaepernick in the wake of the Jimmy G injury?

Some reports, though, noted that the 49ers seem to be moving ahead without considering Kaepernick. ESPN’s Jordan Schultz noted that he is being told the team is about to give Tom Savage a tryout.

In light of the Jimmy Garappolo injury news, the #49ers are bringing in QB Tom Savage for a workout, per source.

Some found the news of a Savage tryout to be a galling idea:

Wait. The @49ers lose Garappolo and they are bringing in Tom Savage for a workout? He was 100% TRASH for the @HoustonTexans. He has lead feet and can’t move. Y’all really doing the most on this white balling of @Kaepernick7, huh? Savage IS A JOKE. https://t.co/pRPJn7eNyv

Over Colin Kaepernick? Politics aside, Kaepernick is a better fit than Tom Savage. https://t.co/XujtSG8eLL