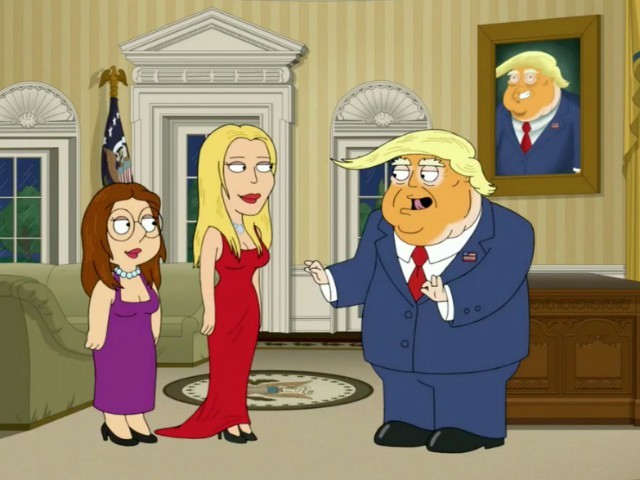 In the preview for an upcoming episode of Family Guy, a President Donald Trump character sexualizes his daughter Ivanka Trump, saying she has a “beautiful rack.”

“Pleased to meet you, Meg. You have a beautiful rack,” the President Trump character said.

When Meg replies, “Thank you,” Trump responds, “I was talking about my daughter,” in front of the Ivanka Trump character.

The anti-Trump episode is set to appear on Fox on January 14th. The premise of the upcoming episode is that Peter Griffin becomes President Trump’s next press secretary.

According to a report from Entertainment Weekly about the new episode, Donald Trump will make some kind of aggressive sexual advance on Peter’s daughter.

Trump takes note of Peter’s fake-news prowess and taps him to become his new press secretary, which prompts the Griffins to move to Washington. But relations between with Trump and Griffin family deteriorate over a serious family matter: after Ivanka Trump befriends Meg and gives her a makeover, POTUS takes unwelcome notice of the new Meg. “We’re just playing to what Trump has already confessed to, say, on a bus,” hints executive producer Alec Sulkin. “And he has an encounter like that with Meg.”

Family Guy creator and voice actor Seth MacFarlane is a staunch leftist and has attacked the president many times. In response to Trump’s Oval Office address Tuesday, MacFarlane said, “This entire Trump speech has the cadence of a Wheel Of Fortune contestant solving the puzzle.”

This entire Trump speech has the cadence of a Wheel Of Fortune contestant solving the puzzle.

The 45-year-old also donated $2 million to a pro-Democrat Super PAC ahead of the 2018 midterm elections.