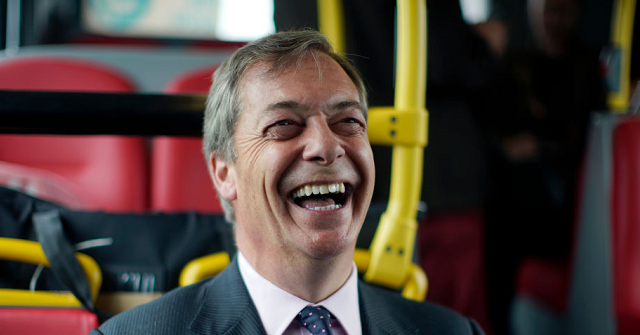 Several UK newspapers carried claims appearing to originate in a regional news website Wednesday that Brexit leader Nigel Farage had been trapped by milkshake-wielding assailants, but spokesmen for the party denied the incident took place.

News outlets including The Guardian, The Mirror, and the Evening Standard cited local news website Kent Live, which reported Wednesday afternoon that “Nigel Farage is stuck on his Brexit bus because people have turned up with milkshake”.

Tweets about claims showed Mr Farage laughing with supporters at the location where the alleged attempted attack took place, and Mr Jukes wrote of the story: “This is Fake News. He did interviews on the bus and then got off to take photos and sign boards with the crowd.”

A spokesman for the party told Breitbart London: “Nigel Farage arrived at Rochester to be greeted by 50-60 local supporters. Three anti-Brexit party activists turned up with milkshakes, they were laughed at and spoken to by the police and put their drinks down. Farage conducted a few interviews on the open-topped bus then came down to speak to supporters and local campaigners.”

This is Fake News. He did interviews on the bus and then got off to take photos and sign boards with the crowd.. https://t.co/cDF1M5pZ4x

The story follows an actual milkshake being thrown on Mr Farage during a campaign stop on Monday. A 32-year-old man was arrested on suspicion of common assault after the attack and Mr Farage is reported to be pressing charges.