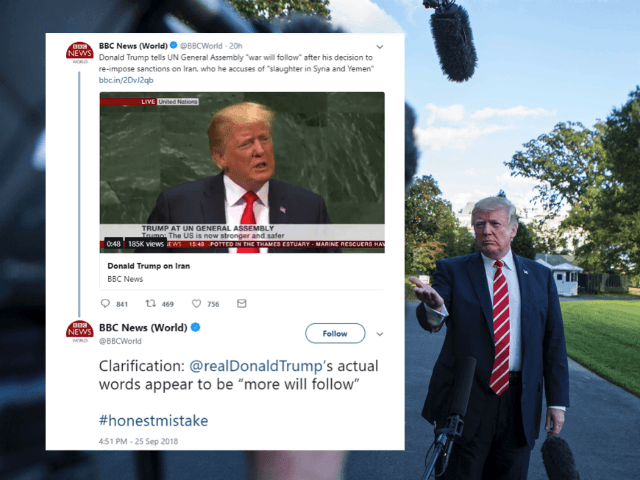 The BBC has belatedly apologised after claiming U.S. President Donald J. Trump said “war will follow” with Iran after imposing sanctions on the Islamist dictatorship.

Speaking about his decision to re-impose sanctions on Iran, which the President accused of “slaughter in Syria and Yemen”, Trump said, “more will follow”.

Clearly blaming the President for the conflict they inadvertently believed was coming, Britain’s BBC Tweeted that:

“Donald Trump tells UN General Assembly ‘war will follow’ after his decision to re-impose sanctions on Iran, who he accuses of ‘slaughter in Syria and Yemen’.”

The fake news Tweet has since been deleted, but the BBC insisted it was an “honest mistake” after the speech to the United Nations General Assembly in New York this Tuesday.

Commenting on the perceived accuracy of their coverage last year, Trump said the BBC is “just like CNN” and his deputy assistant called the broadcaster “pathetic” and “fake news” for its alleged bias.

“The BBC – There’s another beauty. I call them Fake News. They’re Fake News, believe me,” the President said when a BBC reporter attempted to question him in February 2017.

President Trump also hit out at the BBC in January 2017, implying they were sabotaging the “special relationship” between the UK and U.S. by accusing him of bigotry at his first press conference with British Prime Minister Theresa May.

The President also used Tuesday’s speech at the UN to declare: “In less than two years, my administration has accomplished more than almost any administration in the history of our country.”

“We reject the ideology of globalism, and we embrace the doctrine of patriotism,” he also blasted in a confident address.

“We will never surrender sovereignty to an unelected global bureaucracy” he added in a stinging rebuke to the UN, which he has accused of corruption and dishonesty.

“I honour the right of every nation in this room to pursue its own customs, beliefs and traditions,” he added.

“The United States will not tell you how to live or work or worship. We only ask that you honour our sovereignty in return.”