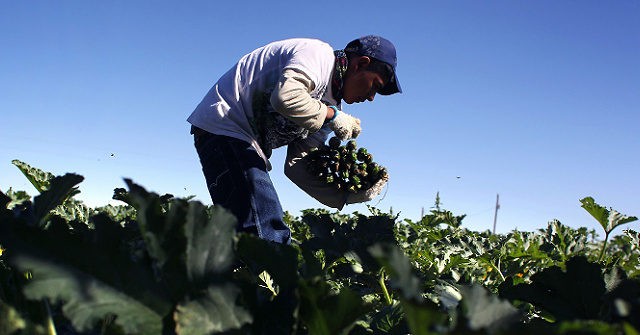 The GOP caucus should unite against the Democrats’ unified push to amnesty illegal migrant farmworkers while President Joe Biden is creating a migration crisis on the border, says a letter to GOP legislators from the Federation for American Immigration Reform (FAIR).

“Passing such a bill at this time is equivalent to repainting a house when it is on fire,” says the March 15 letter by FAIR’s president, Dan Stein, which adds:

Voting in favor of H.R. 1603 in the midst of the current border crisis is akin to supporting President Biden’s broader vision to amnesty every illegal alien in the United States.

So far, ten GOP legislators have agreed to become sponsors of the Democrats’ farmworker amnesty, titled H.R. 1603, the “Farm Workforce Modernization Act of 2021.”

The bill would provide an amnesty to perhaps one million foreign farmworkers — or more, depending on anti-fraud enforcement — plus their families over the next ten years.

Other GOP members from rural districts may back the bill, which would allow farm companies to replace nearly all of their American and illegal employees with imported H-2A workers.

The H-2A workers would accept low wages in exchange for the eventual promise of green cards for their families. That H-2A-to-voter promise would likely provide the Democrats with roughly 100,000 new voters every year, long after the main amnesty is completed.

But the resulting laborforce shift would also reduce local payrolls and tax receipts, so draining the life from many country towns.

The workforce shift would also push many Americans into unemployment — and perhaps drugs — and would retard the technology investment that farm companies and rural towns need to stay ahead of the many rapidly advancing foreign farm companies.

The GOP’s base — and many swing-voters — are strongly opposed to cheap-labor migration.