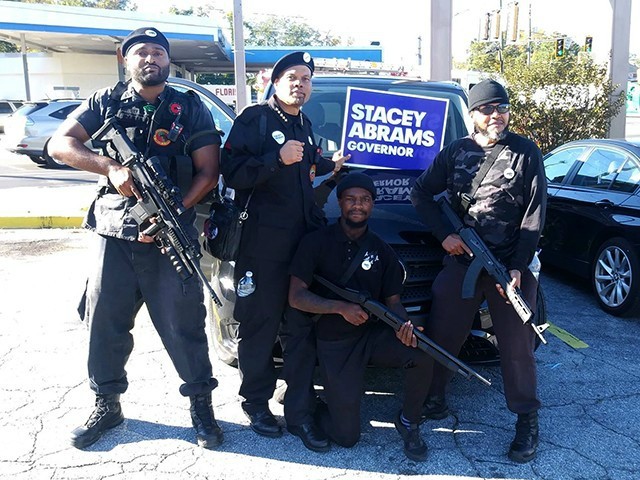 The so-called “fact checkers” at Snopes have reached out to Breitbart News in an openly partisan attempt to wash away the story of armed members of the New Black Panther Party campaigning for the Democrat gubernatorial candidate in Georgia, Stacey Abrams.

The story went viral. Many other national outlets and outlets across Georgia, including a local CBS News affiliate, picked it up and carried the damning images of Abrams’ radical supporters. Since then, President Donald Trump held a rally in Macon, Georgia, for Kemp and the latest polls in the race show Kemp leading Abrams by as many as 12 points.

On Monday, a self-identified “reporter” for Snopes, Bethania Palma, reached out to Breitbart News with a series of questions about the Black Panther report. None of the questions implies anything was inaccurate about the report.

Here is her email to Breitbart News:

I’m a reporter from the fact checking organization Snopes.com. I had a couple of questions about this story:
https://www.breitbart.com/politics/2018/11/04/armed-black-panthers-lobby-for-democrat-gubernatorial-candidate-stacey-abrams/
The story says Breitbart “obtained” images of the Black Panthers. Where did Breitbart obtain the images from?
– Why does Breitbart quote the Kemp campaign with no obvious effort to get comment from the Abrams campaign?
– Why did Breitbart use the term “lobby” in the headline?
– Breitbart normally takes a pro-gun stance. Does Breitbart maintain that stance when the gun owners are black?
– Did anyone at Breitbart make an effort to contact the New Black Panther Party for comment?

Who exactly is this reporter? Who is Bethania Palma?

Just a quick glance at Palma’s Twitter account or at her history of writing for radical leftist outlet Alternet shows a hard leftist mentality, one quick to accuse Trump of being “racist” (the latest is a series of tweets attacking the president’s campaign ad on the migrant caravan as such) or linking Trump to the Ku Klux Klan any way she can–a history dating back years, as Breitbart News has reported about Palma before.

Before publishing this story, Breitbart News sent Palma a series of questions of our own about her inquiry to us:

1.) Why can anyone trust Snopes to be an independent authority on fact-checking when you personally are so clearly biased in favor of leftists?
2.) You implied in your questions to us that our story had something to do with race. The story clearly did not. What made you think that? Please be specific.
3.) In your questions to us, you did not indicate that there was anything even close to inaccurate in our story. So, again, please be specific: what exactly are you “fact checking”?
4.) Do you send similar lists of questions to outlets like the New York Times, Washington Post, CNN, and others on their reporting?

Palma has not replied to our request for comment before publication.