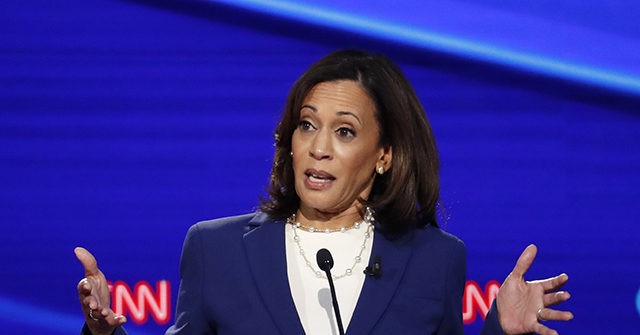 During the CNN and New York Times Democrat debate on Tuesday night, Sen. Elizabeth Warren (D-MA) suggested that politicians cannot pretend to take on Big Tech and big pharmaceutical corporations after taking their donations — something Sen. Kamala Harris (D-CA) has continued to do throughout her run for president.

After Harris demanded that tech corporations like Twitter ban President Trump from their platforms, Warren touted that she, unlike Harris, has refused to take donations from Big Tech and Big Pharma.

Harris, despite claiming that she will fight Big Tech and Big Pharma companies if elected, has taken donor money from employees of the country’s biggest tech conglomerates and pharmaceutical executives, as Breitbart News has detailed.

Harris’s top donors include lawyers from the Paul, Weiss, et al. law firm, which has represented Citigroup, as well as American job outsourcers and offshorers such as the Walt Disney Company; multinational communications services AT&T; Alphabet Inc., which is the parent corporation of Google; as well as Apple Inc.

In May, billionaire Gordon Getty of the Getty Oil dynasty hosted a fundraiser for Harris at his mansion in San Francisco, California, with Gov. Gavin Newsom (D-CA). Campaign records find that the billionaire Getty family has contributed thousands to Harris.

Likewise, though Harris’s campaign has claimed that she does not accept funding from Big Pharma, a number of pharmaceutical executives have gifted the California senator with campaign cash, The Intercept notes:

Silicon Valley’s tech elites have been major contributors to Harris’s bid as she has campaigned against slapping tariffs on the foreign-made products of tech corporations.