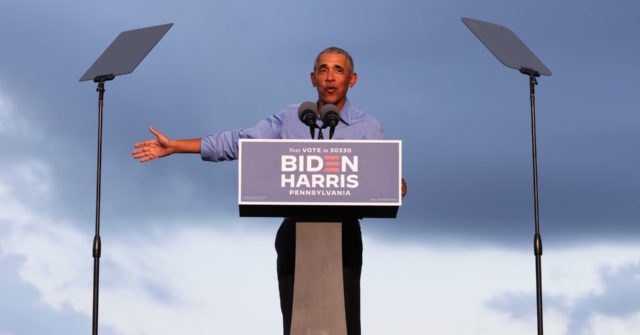 VERDICT: FALSE. That claim, published by The Atlantic on the basis of anonymous sources, is considered debunked.

Former President Barack Obama spoke on behalf of Democratic Party presidential nominee Joe Biden at a drive-in rally in Philadelphia, Pennsylvania. (Biden himself called a “lid” on Monday, lasting throughout the week until Thursday’s debate.)

Obama repeated many false claims familiar from Biden’s own stump speech, including the “suckers and losers” hoax:

Just like when Russia puts bounties on the heads of our soldiers in Afghanistan [sic], the commander-in-chief cannot be missing in action. I can tell you this, Joe Biden would never call them and and women of our military “suckers or losers.” Who does that? He knows these heroes are somebody’s children, somebody’s spouse, dad or mom. He understands that. he will restore our standing in the world, because he knows America’s true strength comes from setting an example that the world wants to follow, a nation that stands with democracy, not dictators.

First of all, the Pentagon has said there is no “corroborating evidence” of the story about Russian bounties.

JUST IN: Statement from the Pentagon on the intelligence that Russian GRU operatives had offered bounties for US troops in Afghanistan:

“To date, DOD has no corroborating evidence to validate the recent allegations found in open-source reports.” pic.twitter.com/Q1rOjtgQXc

Second, Obama was exaggerating the already-debunked claims of the Atlantic. As Breitbart News pointed out in a fact check of a similar statement by Biden:

Biden was referring to a story in The Atlantic earlier this month that claimed — citing four anonymous sources — that Trump had specifically referred to the American dead in a World War I military cemetery in Europe as “suckers” and “losers.” (Biden went further, claiming Trump had been accused of referring to all veterans that way.)

No one else has corroborated the Atlantic‘s claim. Even Fox News’ Jennifer Griffin, who claimed that she had “confirmed” other details in the story (from two similarly anonymous sources), could not confirm the Atlantic‘s “suckers” and “losers” claim.

Moreover, more a dozen current and former Trump administration officials have publicly and demonstratively denied the claims in the Atlantic article — including former National Security Adviser John Bolton, who has become a Trump critic.

As for standing with “dictators,” that was a frequent criticism of Obama himself, who normalized relations with the Cuban communist dictatorship, pursued an extremely weak nuclear deal with Iran, and literally bowed to the Saudi king.