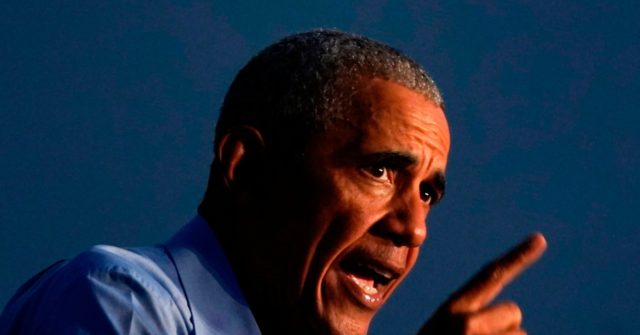 CLAIM: “Other countries are still struggling with the [Chinese coronavirus] pandemic, but they’re not doing as bad as we are because they’ve got a government that has actually been paying attention,” former President Barack Obama declared Wednesday while campaigning for his former number two, Democrat presidential nominee Joe Biden, in Pennsylvania.

Obama suggested the coronavirus situation in the United States is worse than in all other countries.

In sheer numbers, the United States has more cases and deaths than any other country, Worldometer data showed Wednesday.

The international community does not trust data from China, the virus’s birthplace, and the most populous country in the world.

Communist China hid the extent of the outbreak at its early stages, allowing it to spread.

Johns Hopkins University data revealed that the per capita average number of new daily cases reported over the week that ended Wednesday in the five most-affected countries in Europe alone is more than 20 percent higher than the increase in the United States during the same period.

Each of the five most-affected countries in Europe as of Wednesday — France, the United Kingdom, Russia, Spain, Italy — had reported a record number of infections in recent days.

While there is an ongoing new daily case surge in the United States, the average number of new infections remains before peak levels, data from the COVID Tracking Project showed Wednesday evening.

The virus is currently slamming all of Europe with deaths, hospitalizations, and cases on the rise, the World Health Organization (W.H.O.) warned late last week.

“The drop is seen in all groups, including older patients and those with underlying conditions, suggesting that physicians are getting better at helping patients survive their illness,” it added.

The Chinese coronavirus that has claimed over 200,000 American lives is “God’s gift to the Left,” declared Democrat Party fundraiser Jane Fonda. https://t.co/IZNpJ1TcTj

Besides China, other countries that experts say have lied about their virus data include Iran, socialist Venezuela, and communist North Kora, particularly given their propensity to deceive their citizens and the international community.

There are likely more autocratically-ruled and proverty-stricken countries that are unwilling or unable to report on the extent of the outbreak within their borders.

The U.S., the third most populous country globally, has conducted more tests per one million residents than dozens of countries, Worldometer added.

In sheer numbers, the United States has done more testing than every country except China. More tests translate to more cases detected.

Yesterday, when asked if he would do anything differently [about the pandemic], Trump said, ‘Not much.’ Really? Not much? Nothing you can think of that could have helped some people keep their loved ones alive?

Despite months of low cases and hospitalizations, the number of virus-linked fatalities in Democrat-run New York (fourth most populous) far exceeds any other state, including the top three most populous, Worldometer revealed.

Democrats run three of the top-five U.S. states for deaths.

“Joe will get this pandemic under control,” Obama proclaimed.