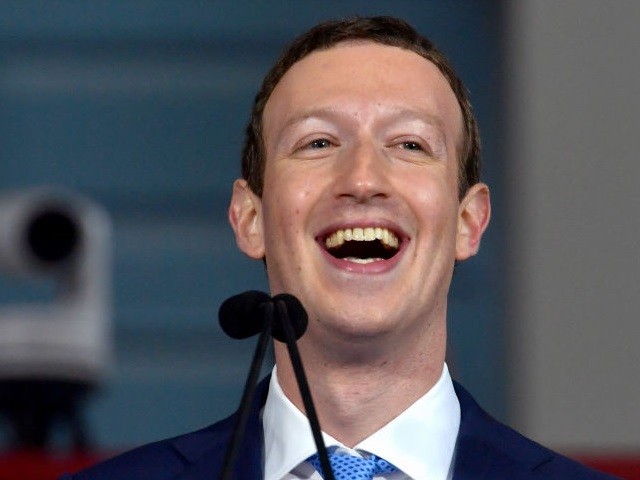 While the big story in social media over the last week has been the incredible news that Twitter is now censoring President Trump’s tweets, we’ve also been provided with another reminder of the flawed and biased “fact checking” that another tech giant, Facebook, uses to lessen the impact of Breitbart News on its platforms.

USA Today was allowed to block immediate access to the Instagram post because of its subjective and political disagreement with Breitbart News’ accurate use of the term “amnesty” in the context of reporting on the proposed HEROES Act, Pelosi’s dead-on-arrival to the Senate coronavirus bill.

On May 12, Breitbart News published an article entitled, “Pelosi Coronavirus Plan Allows Business to Hire Illegal Aliens Over 33M Unemployed Americans,” and posted a screengrab of the article headline and a summary of the article on Instagram as well

Why? USA Today did not say. But had published the following article on May 14, written by an intern serving on its Facebook fact-checking team: “Fact check: House bill does not grant amnesty to immigrants illegally in U.S.” In its article, USA Today contends that the term “amnesty” can only be used their intern’s subjective and restrictive interpretation of the Black’s Law definition of the term; basically, that the word “amnesty” can only be used to refer to a permanent pardon for an offense.

This is despite the fact that the phrase “amnesty” has been used to apply to temporary relief from the consequences of illegal immigration by the New York Times, The Atlantic, The Wall Street Journal, and NPR.

“This is not fact-checking,” said Breitbart News editor-in-chief Alex Marlow. “This is policing language to make life difficult for political adversaries. It is literally Orwellian. Facebook is coordinating with one of our competitors in an attempt to strongarm us into changing long-standing editorial policy in order to confuse our audience and lessen our impact. It’s so obvious that what they are doing is ideological harassment.”

Upon learning of the alleged fact check, as per Facebook’s instruction (Facebook does not entertain direct appeals of its fact-checkers’ decisions), Breitbart News appealed the rating to USA Today — who gave the rating in the first place.

Here is what Breitbart News wrote in its email:

To Whom It May Concern:

We are writing to appeal (and demand immediate removal of) your PARTLY FALSE rating on our article: Pelosi Coronavirus Plan Allows Business to Hire Illegal Aliens Over 33M Unemployed Americans

The term “amnesty” has a regular and specialized use in the illegal immigration context; it can and often is used to refer to allowing illegal immigrants to stay in the United States (i.e. protection from deportation), whether permanently or temporarily.

Examples, going back years and from a wide variety of sources, of the concept of “amnesty” applying to temporary protection from deportation, include, but are not limited to:

The New York Times: The Word May Be Toxic, but Amnesty Is Everywhere

From the story: And although there have been temporary immigration amnesties in the past, they have been rare and unpredictable. And today, in contrast with, say, the tax system, there is no large-scale amnesty program available.

From the story: Panicked Democrats locked in tight midterm races as the party tries desperately to hold onto control of the Senate fear President Obama’s anticipated executive amnesty for about 5 million illegal immigrants may doom their re-election campaigns….Obama has yet to release details about his impending executive action, but he has been considering a number of options that could grant temporary legal protection from deportation — on the basis of family relationships with citizens, length of residency or employment — to as many as 5 million people residing in the country without permission.

From the story: In June 2012, Obama announced he would unilaterally grant temporary amnesty to some young undocumented immigrants, a program known as Deferred Action for Childhood Arrivals, or DACA.

The Washington Post: Congress tried to fix immigration back in 1986. Why did it fail?

From the story: What did the 1986 immigration law do? Two big things. First, there was the “amnesty” bit. Any unauthorized immigrants who had already been living in the United States continuously since 1982 became eligible for temporary legal status, after paying a $185 fee and demonstrating “good moral character.”

From the story (HuffPost refers to a temporary deferment of deportation as “amnesty,” in the story’s title): As governor of Massachusetts, Mitt Romney worked with the state’s Democratic leaders to temporarily stop the deportation of an African immigrant who was in the country illegally.

From the story:  Homeland Security Secretary Janet Napolitano extended temporary amnesty to Haitians who were illegally inside the U.S. before Tuesday’s earthquake, but warned that the Coast Guard would turn back any new refugees fleeing the devastation.

From the story: But the prospect of Republicans shutting down the Department of Homeland Security — including the Border Patrol — in retaliation for Obama’s temporary executive amnesty strikes the White House as unlikely, to say the least.

From the story: James Argroves of Peach State Public Radio reports from Vidalia Georgia, on an unusual agreement between onion growers and the Immigration and Naturalization Service that grants temporary amnesty to undocumented workers, so they can harvest the state’s 90-million-dollar onion crop. I.N.S. investigator Bart Safniki says the agreement is good for both the government and the growers but insists it’s a one-time deal.

If, therefore, the crux of your argument is that the term “amnesty” does not apply to the HEROES Act because the protections within the Act are not permanent, you are clearly mistaken.

Please also note that in our story, our writer makes the temporary nature of the amnesty proposed by the HEROES Act extra clear, by using the term “during the crisis.”

Again, we hereby insist that USA Today immediately remove the Partly False rating from our article.

In its response, USA Today denied the appeal, writing:

Thank you for your appeal of our fact-check, and for sending along examples of work that support it.

We at USA Today are part of Facebook’s third-party fact-checking program. Facebook works with independent fact-checking organizations around the world that are certified by the International Fact-Checking Network (IFCN). We review and rate the veracity of articles, images, videos and text posts, focused on claims that are spreading virally. You can read more about our methodology here.

After reviewing your dispute, we have respectfully decided not to change USA TODAY’s partially false rating, for this reason:

If you issue a correction, we will review it and can update the rating on your content. Please note that deleting a post or removing a URL will make it impossible for us to process your appeal. Per Facebook’s Help Center: For corrections to URLs, please ensure the relevant information has been corrected on both your website and the relevant Facebook post (including headline).

In its rejection of Breitbart’s appeal, USA Today falsely claimed that the concept of “temporary amnesty” is only used by opponents of the policy (the newspaper was presented with the NYT, Atlantic, and NPR as counter-examples, but ignored them); and even if only used by opponents of illegal immigration, that is an admission of its regular usage, and the common understanding of it in the immigration context.

By USA Today’s standard, the articles from NYT, The Atlantic, NPR, and the Wall Street Journal also deserve a “fact check” label — and yet, mysteriously, USA Today didn’t fact-check them.

Facebook has set up a system that allows interns at establishment media organizations to use false “fact check” labels to limit the spread of articles from their ideological and commercial competitors. Furthermore, the only way to appeal the decision is by appealing to the “fact checkers” themselves – and there is no review process or punishment for fact-checkers who get things wrong.

By outsourcing decisions to “fact check” news articles to third-parties, Facebook attempts to remove itself from direct blame for politically biased decisions, which when combined with the limitation of a “fact checked” article’s reach, amounts to the politically-motivated censorship of information.

This decision by USA Today comes just as the problem of politically biased “fact checking” on Silicon Valley platforms has been thrown into the spotlight, after Twitter decided to “fact check” a tweet from President Trump expressing concerns about voter fraud with mail-in ballots. The biased fact-check has led the President to once again threaten action against politically biased tech companies.

“Republicans feel that Social Media Platforms totally silence conservatives voices. We will strongly regulate, or close them down, before we can ever allow this to happen,” said President Trump in a tweet posted last week.

His warning was followed by the President’s executive order on social media censorship, which calls for the FCC to narrow the bounds of the blanket legal immunites enjoyed by Big Tech platforms like Facebook. The order also establishes a complaint process for victims of Big Tech censorship to file complaints through the Department of Justice and FTC as potential deceptive business practices, and directs the Attorney General to assemble a working group to investigate allegations of the same.