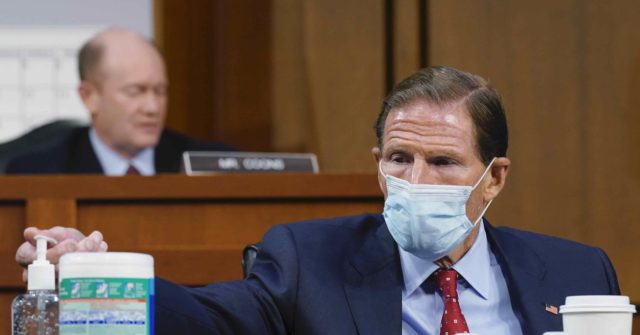 CLAIM: Judge Amy Coney Barrett said in Kanter v. Barr that “It sounds kind of radical to say felons can have firearms.”

VERDICT: FALSE. Sen. Dick Blumenthal (D-CT) was quoting a speech, not a judicial opinion — and he did so out of context.

Sen. Blumenthal tried to portray Judge Barrett as “radical” on the question of the Second Amendment during her confirmation hearing at the Senate Judiciary Committee on Tuesday.

In so doing, he challenged her dissent in Kanter v. Barr, in which she argued — based on an originalist reading of statutes and precedents — that while the government had a strong interest in keeping guns out of the hands of violent felons, the scope of that power had not been interpreted in the past to include non-violent felons as well, absent a showing that they would be dangerous.

Barrett: Did I say it was “radical” in the opinion?

Blumenthal: I think you said, quote, “It sounds kind of radical to say felons can have firearms.” That’s a direct quote.

Barrett: Oh. I didn’t remember that particular language. … I’m not — I just don’t recall it, but I’m not nitpicking about it.

Blumenthal: We can look it up.

We did look it up, and Blumenthal was wrong.

Nowhere in the entire text of Kanter does the word “radical” appear. (Blumenthal clearly had not read the case.)

The source for Blumenthal’s quote appears to be a BBC article about Barrett’s views:

Speaking about her dissent to students at Hillsdale College last year, Judge Barrett said while it “sounds kind of radical to say felons can have firearms”, she found no “blanket authority” to take guns away from Americans without showing the individual was a danger.

Viewed in context, where Barrett was explaining a concept to students, Barrett was arguing that while it “sounds” radical to say that “felons” should be able to own firearms, a legal analysis would show that it was not radical to separate non-violent felons from violent felons.

What was bizarre, she suggested, was the proliferation of petty felonies that could endanger citizens’ liberties.