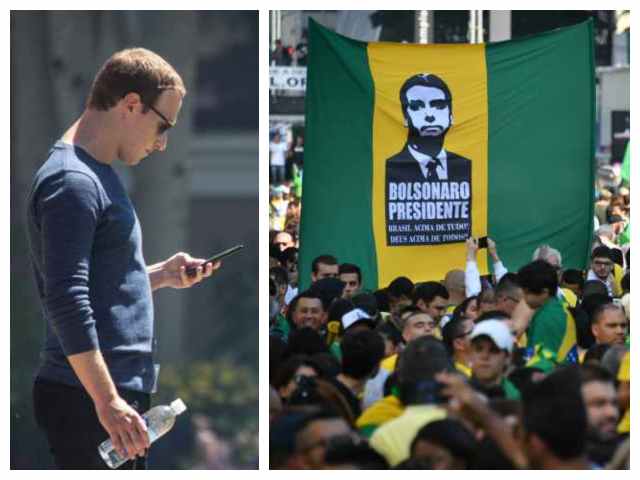 Facebook has reportedly blacklisted accounts and pages from the “main network of support” for right-wing Brazilian Presidential Candidate Jair Bolsonaro less than a week before Brazil’s runoff election on Sunday.

Reuters reports that Facebook has shut down 68 pages and 43 accounts linked to the Brazilian marketing group Raposo Fernandes Associados (RFA) for violating the website’s rules related to spam. The Brazilian newspaper O Estado de S. Paulo has claimed that the marketing group has been one of the biggest support networks for right-wing Brazilian Presidential Candidate Jair Bolsonaro.

Facebook said that RFA created Facebook pages using multiple accounts or fake accounts with the same name and posted multiple clickbait style links which lead to “ad-farming” websites.  Facebook said in a statement: “Our decision to remove these pages was based on the behavior of these actors – including using fake accounts and repeatedly posting spam – rather than on the type of content they were posting.”

Facebook has claimed that the removal of RFA’s pages and accounts had been part of the many actions they have taken “to prevent bad actors from interfering with Brazil’s elections on Facebook.” Brazils leftist presidential contender, Fernando Haddad of the Workers Party, has claimed that the Facebook-owned messaging app WhatsApp was being used to spread spam and misinformation surrounding the election.

Haddad has claimed that Bolsonaro’s supporters used the platform to spread misinformation and fake news. Haddad has also claimed that businessmen supporting Bolsonaro have paid to flood the platform with misleading propaganda, violating federal election law, a claim which Bolsonaro denies. WhatsApp has stated that they take these claims very seriously and had “taking immediate legal action to stop companies from sending bulk messages.”

Bolsonaro leads Haddad by 18 points in the latest polls and is expected to win Sunday’s election after taking up 46 percent of the vote in the first round of elections two weeks ago. Bolsonaro has been unable to campaign publicly after a public attack in which he was stabbed in the abdomen, as a result, he has conducted his campaign largely online. He currently has 14 million followers across social media platforms Facebook, Twitter, and Instagram, compared to just 2.8 million for Haddad.