Facebook has started blocking links to free speech-based competitor Minds, claiming the website is “unsecure” and advising users not to promote it.

Attempting to send a link to the social network to friends on Facebook will return users with a “security check” notice, which claims Minds is an “unsecure” website and recommends not to send the link.

“To protect your account, we recommend not posting the link. If you want to share it anyway, you’ll need to complete this security check,” the notice declares, making users complete a CAPTCHA before the link will send. 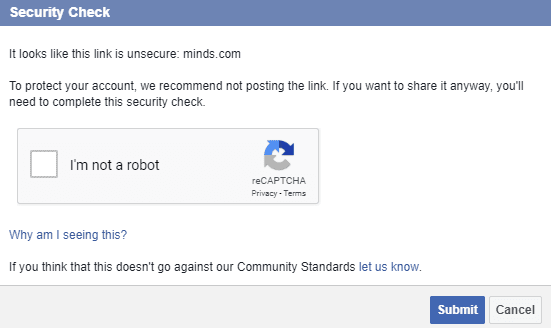 If users refuse to fill out the CAPTCHA, the message with the link will not send.

“Facebook’s newest effort is a direct attack on one of their largest competitors, Minds.com,” declared Minds in a statement. “Minds is fully encrypted and open source — unlike Facebook — and has never been hacked — something that Facebook can’t claim.”

“The Minds team has attempted to reach out to FB repeatedly to resolve the issue,” the social network continued. “Radio silence.”

“Since we launched Minds in alpha in 2012, we have always attracted an audience from across the political spectrum, including progressives, libertarians, centrists, and non-political content creators,” he expressed, while following Facebook’s privacy scandals this year, Ottman declared, “There is no redemption at this point.”

“At the heart of Facebook is a complete and utter lack of transparency and commitment to put users first,” Ottman continued. “It’s time for people to vote with their energy online to empower new social networks that respect freedom from the ground up… Users don’t own their content on Facebook.”