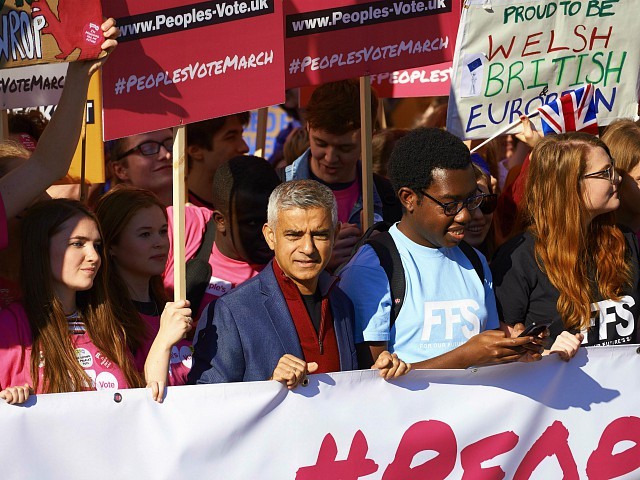 The anti-Brexit People’s Vote march was just one-third of the size organisers claimed, it has been revealed.

The group, which pushes for a second referendum, claimed that 700,000 people marched on London on October 20th, 2018, but Scotland Yard confirmed to The Telegraph that the estimate is closer to 250,000.

“The Greater London Authority (GLA) has included an estimated attendance figure of 250,000 in a debrief document,” Scotland Yard said in a statement to the conservative newspaper following a Freedom of Information request.

“Please note this is not a Metropolitan Police Service estimate as we have not recorded an estimated attendance figure for the march,” the police force added.

The People’s Vote, launched in April 2018 by Remainer MPs Chuka Umunna (Labour), Anna Soubry (Conservative), and Caroline Lucas (Green), is supported by many of the key players in the Tony Blair-backed Remain continuity campaign Open Britain and pushed for a “public vote” on the final Brexit deal — i.e., a second referendum.

Labour’s London mayor Sadiq Khan, who spoke at the march and hailed it a “historic moment in our democracy,” oversees the GLA.

The People’s Vote claims its wildly inaccurate estimations were “based on intelligence from both volunteers and professional stewards.”

Leave Means Leave co-chairman Richard Tice said of the revelation, “As we knew at the time, People’s Vote lied about its march size, [and it] appears [the] GLA covered up the truth. Did Mayor Khan know of cover up? Enquiry needed.”

Former UKIP leader and MEP Nigel Farage said, “People’s Vote lied about the number of supporters at their rally in London. Hardly surprising, the pro-EU lobby have been lying to us for over 50 years.”

Meanwhile, a petition pushing for the UK to leave the EU in a clean break has reached more than 300,000 signatures.

MPs are set to return to Parliament next week to debate Prime Minister Theresa May’s Withdrawal Agreement, with a vote slated for the week beginning January 14th. Dubbed “the worst deal in history” by Mr Farage, should it be voted down the legal default is a no-deal Brexit where the UK would leave on March 29th without a deal.

The UK would then trade with the bloc on World Trade Organization terms — the same as she trades with the rest of the world — and can immediately begin signing new, ambitious bilateral trade agreements with countries like the United States without having to be locked into regulatory alignment with the bloc during a near-two year transition period.