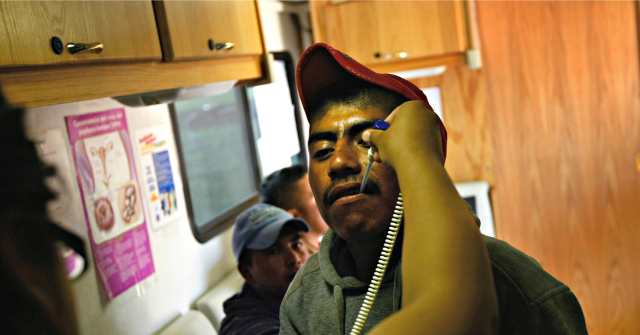 A plan endorsed by nearly every Democrat running for president that would give free taxpayer-funded healthcare to all illegal aliens would drive a migration of “people with serious health problems” to the United States, a health insurance expert tells the New York Times.

Health insurance expert Linda Blumberg with the Urban Institute admitted to the Times that a single-payer healthcare policy, like Sanders’ plan, which provides free, taxpayer-funded healthcare to illegal aliens, would drive a migration of sick foreign nationals to the U.S.

But Linda J. Blumberg, a health policy fellow at the Urban Institute, argued that a single- payer system, such as the one proposed by Senator Bernie Sanders of Vermont, could indeed create “strong incentives for people with serious health problems to enter the country or remain longer than their visas allow in order to get government-funded care.” [Emphasis added]

The Times also admitted that should the U.S. provide healthcare to all 11 to 22 million illegal aliens living throughout the country, it would be nearly the only nation in the world to do so.

“If the United States were to begin providing comprehensive health coverage to undocumented immigrants, it would be an outlier, health policy experts say,” the Times reported. “Even countries with universal, government-run coverage like Norway place tough restrictions on health care for undocumented immigrants. Most immigrants can get emergency care but have to pay other costs.”

Though it is unclear the magnitude of a mass migration of sick foreign nationals that could be spurred by offering free healthcare to illegal aliens in the U.S., Breitbart News has projected that such a plan would cost American taxpayers hundreds of billions of dollars every decade.

Free Health Care for Illegal Aliens Could Cost American Taxpayers up to $660B a Decadehttps://t.co/7nis61rP4y

A reasonable estimate of health care for each illegal alien, Center for Immigration Studies’ Steven Camarotta told Breitbart News, is about $3,000 — about half the average $6,600 that it currently costs annually for each Medicaid recipient. This assumes that a number of illegal aliens already have health insurance through employers and are afforded free health care today when they arrive at emergency rooms.

Based on this estimate, should the full 22 million illegal aliens be living in the U.S. that Yale University and Massachusetts Institute of Technology researchers have estimated there to be, providing health care for the total illegal population could cost American taxpayers about $66 billion a year.

Over a decade, based on the Yale estimate of the illegal population and assuming all sign up for free health care, this would cost American taxpayers about $660 billion.

Today, Americans are forced to subsidize about $18.5 billion worth of yearly medical costs for illegal aliens living in the U.S., according to estimates by Chris Conover, formerly of the Center for Health Policy and Inequalities Research at Duke University.