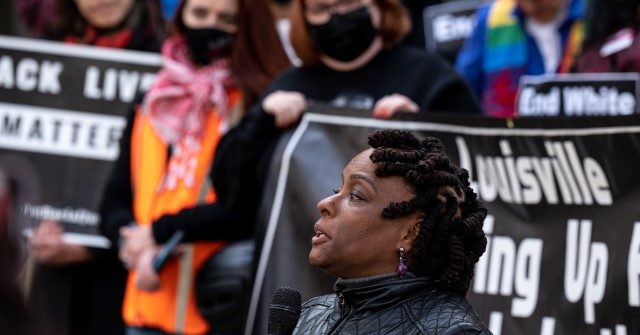 In response to a BLM chapter funding the release of the attempted murderer of a Jewish mayoral candidate on Wednesday, the nation’s oldest pro-Israel organization released an exclusive statement to Breitbart News addressing the matter.

“It’s telling that the Black Lives Matter organization posted bond for Quentiz Brown after Brown attempted to murder a Jewish politician, tweeted that blacks who murdered police officers must be freed, and falsely claimed that those promoting Palestinian rights are censored,” Klein said on Friday.

He also asserted that the funding of Brown’s release was “consistent” with the radical social justice group’s past anti-Semitic rhetoric.

“Posting bond for Quentiz Brown is consistent with the BLM organization’s and BLM leaders’ statements falsely condemning Israel and lauding Jew-hater [Louis] Farrakhan,” Klein said, adding that it also “evidences that the BLM organization is an anti-white, anti-Semitic, Israelophobic group that must be carefully monitored.”

Brown allegedly walked into Greenburg’s office and fired shots at the candidate and four other people. Though one bullet struck Greenburg’s clothing, no one was injured in the shooting attack.

Helm is also the co-founder of the Louisville Community Bail Fund which teamed up with BLM Louisville to pay the $100,000 bond for Brown’s release to home incarceration.

The $100,000 cashiers check has been officially given to the clerks office to pay for @BLMLouisville activist Quintez Brown’s release. @LouCommBailFund is paying. Brown is accused of shooting at Louisville mayoral candidate @RunWithCraig. pic.twitter.com/5BMdW2hpfm

Louisville Metro Council President David James said the BLM-funded group should not have bailed Brown out of jail.

“They are going to be responsible for what he may or may not do to anybody,” James told WHAS ABC11.

Brown was selected to attend the launch of the Obama Foundation’s My Brother’s Keeper (MBK) Alliance in 2014, and in 2020 he was honored by the foundation’s MBK Rising initiative, which seeks to combat America’s “widespread,” “persistent social inequities,” which are “rooted in structural and institutional racism” and are responsible for preventing “our boys and young men of color from reaching their full potential.”

“I better my community for the boys that look just like me by changing the narrative around violence, masculinity, and professionalism,” Brown said in a statement which appears on the foundation’s website.

The ZOA reviewed Brown’s many tweets and retweets posted over the last two months, concluding they reveal him as a man who “embraces Israel-haters, socialism and communism; is filled with hatred for police; and justifies Black violence.”

The incident comes as crime has surged nationwide after progressives campaigned endlessly against police, leading to eroded confidence in law enforcement, sunken police morale, and an officer exodus.

Last month, Brown University economics professor Glenn Loury lamented the current state of crime nationwide, as he accused BLM activists of having “buckets of blood on their hands” for their role in soaring crime and homicide rates.

In December, it was revealed that BLM activists gave a talk to over 150 people, telling students that “crime is made up” and black people are “enslaved” when they are sent to jail.

In June, in the wake of the previous summer’s BLM riots and a continuing crime wave across America’s big cities, nearly half of voters polled expressed their belief that anti-police protests hurt public safety.

In May, Breitbart News reported that since the death of George Floyd, Hollywood has devoted significant airtime to promoting far-left racial ideologies, with one report finding that 127 TV episodes have pushed BLM, the “defund the police” movement, and the belief that America is “systemically racist.”