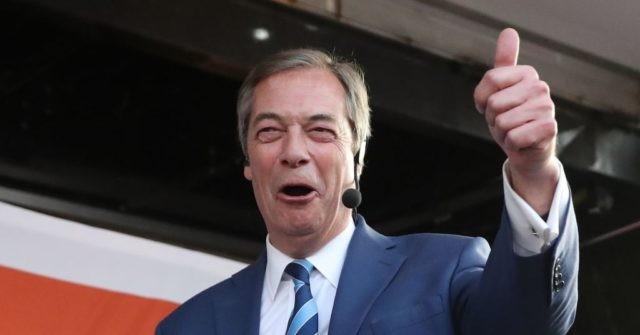 STRASBOURG, France — Nigel Farage told Breitbart London that despite the “bitter, twisted” left working so hard to undermine the Trump and Brexit victories, the right wing can be cheerfully defiant and, in a nod to Andrew Breitbart, should be happy warriors.

Mr Farage’s comments came after his newly elected MEPs took their seats in the European Parliament last week, crowning a remarkable start for the Brexit Party — which went from being newly founded to becoming the single largest party in the whole of the Europe Union in less than two months.

Rallying his MEPs outside the Parliament building before they entered en masse to stage a protest against the European Union asking people to stand for its “national” anthem — Mr Farage and others reject the EU’s pretensions to statehood — the Brexit leader said they should adopt a stance of “cheerful defiance”.

Mr Farage told Breitbart: “When I was talking to a Turning Point conference last year I said ‘be happy warriors’ — those on the centre-right of politics need to be happy, need to be cheerful; it’s the left that are bitter and twisted and miserable. We’re the real people!”

Explaining why it was that the left were so bitter — an attitude displayed recently in milkshake attacks against Mr Farage, right-leaning journalist Andy Ngo, and others — the Brexit Party chief explained that “they haven’t accepted the fact they lost those elections” in 2016.

“They’ve done everything they can, whether it’s through the Mueller Report [in the United States], or endless problems in our Parliament in Westminster. They want to stop these things from being a reality.

“We could be very upset and very angry, but actually, the reason they are behaving so badly is that we’re winning! And that’s something we should be rather happy about… I’ve always tried, especially here in the Strasbourg European Parliament, to make people smile. We’re only human.”

One year ago, conservatives everywhere received the shocki… http://t.co/mBJRQyiBma