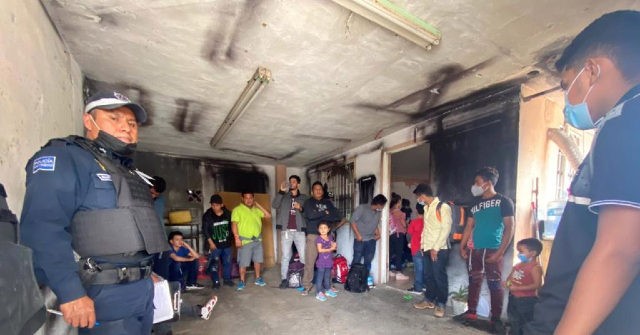 Breitbart Texas obtained an exclusive video of the inside of a human smuggling stash house in a Mexican border state. Authorities in Nuevo Leon, Mexico, continue to witness a drastic increase in the number of migrants arriving in their region as they seek to reach the U.S. border.

The following short video captured the moment when state police forces in Nuevo Leon raid a stash house where cartel-connected human smugglers held 53 Central American migrants. The group includes 24 minors. The video shows the overcrowding and lack of basic necessities the migrants had to endure at the hands of their human smugglers. The raid took place in the Jardines neighborhood in the suburb of Escobedo. The town is located in the northern part of the Monterrey metropolitan area.

After getting the migrants out of the house, authorities learned that the group had been there for three days awaiting permission from an unnamed cartel to continue their journey north and cross into Texas. Authorities did not reveal if the migrants were headed to the Mexican border cities of Reynosa or Nuevo Laredo — two of the main human smuggling hubs that experienced the most activity since the start of the year.

As Breitbart Texas reported, authorities in the border states of Nuevo Leon and Tamaulipas documented a dramatic increase in the number of migrants using their states to reach Texas.

Gerald “Tony” Aranda is a contributing writer for Breitbart Texas.