A growing group of moms from across America — and across the political spectrum — have created a covert network dedicated to combating critical theory pedagogy in private schools accredited by the National Association of Independent Schools (NAIS), and are setting out to destroy what one mother calls the “head of the snake.”

The central goal of the group is to expose and put a stop to political indoctrination in their children’s schools, declining academic standards, and opaque school governance and financial management — which they believe stems from NAIS.

The moms are of a variety of political leanings — some of whom told Breitbart News they have “maxed out” political donations to former President Obama and to Hillary Clinton — and do not have a collective political ideology. Their only stance is opposition to political indoctrination of any kind in school.

Speaking to Breitbart News, the “Undercover Mothers” detailed what they believe to be an effort at “elite capture” of private school kids by Marxist ideologues, hoping to control the worldview of those likely to be influential when they grow up; as one explained, “1.2 percent of the nation’s children go to private schools, but a third of Biden’s cabinet went to these schools … once you’ve got the elite organizations, that changes the entire makeup of the country.”

The identities of the mothers speaking out have been withheld due to fear of retribution against them and their children. NAIS member private schools across America are including provisions in enrollment contracts prohibiting them from “[voicing] strong disagreement” with school policy or curricula, under threat of expulsion. Multiple similar contracts were reviewed by Breitbart News from schools in various states in reporting this story.

One of those contracts reviewed by Breitbart News states:

School/Family Cooperation – A positive and constructive relationship between the School and Family Member … is essential to the School’s educational purpose and responsibilities to its students. If any Family Member

Multiple mothers who spoke to Breitbart News have already been dismissed from school involvement, and one mother was forced to remove her children from the school they were attending or face expulsion, all for vocalizing their concerns over their kids’ education. 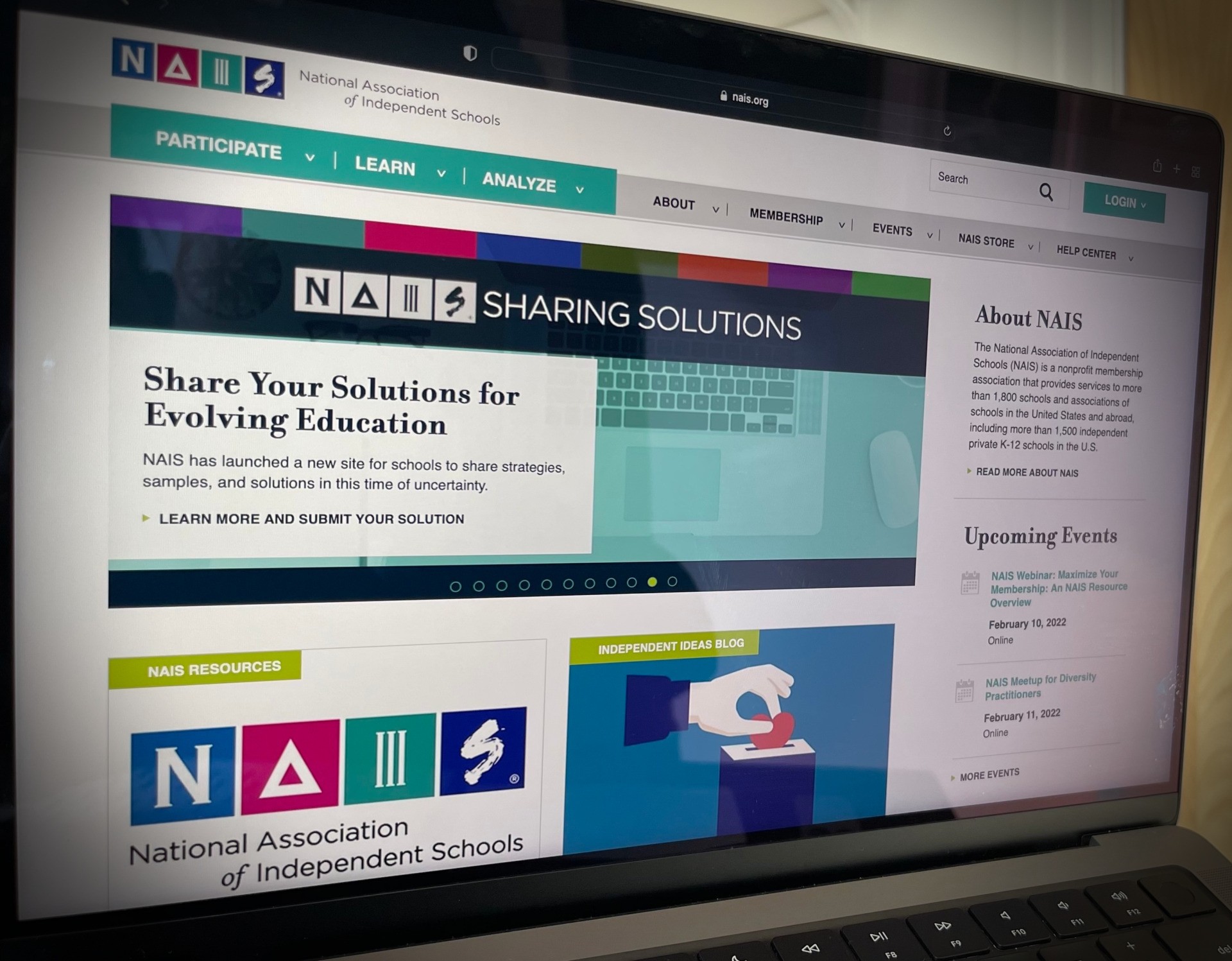 The website of the National Association of Independent Schools (Breitbart News)

The “Undercover Mothers” group was formed after former New York City private high school math teacher Paul Rossi published an open letter blowing the whistle on the rampant indoctrination in America’s schools via critical theory. The group has grown to about one hundred participants across the country, since it formed in the spring of 2021.

“We came together as a part of what really began with Paul Rossi and his letter. Many of us saw his letter, which included his email address, many of us emailed him, he connected a few of us and here we are,” one mom told Breitbart News. “We started talking, and talking about our experiences and why we were moved by Paul’s letter, and it turned out that most of us had had almost identical experiences in different schools … in different regions all around the country, north, south, east, west, Midwest, Pacific Northwest, everywhere. And that became kind of an alarming realization.”

The mothers formed a group chat on encrypted messaging app Signal, connecting initially over their shared experiences with their respective schools, their shared disgust for their children’s curricula, and their mutual frustration with unresponsive school administrators, and the similarities across the country pointing to centralized coordination.

They then set out to map the structure of power over the education system, to pinpoint the entities responsible for the decay.

“It was very eye opening, that the same exact things were happening, and not just the same books and the same lessons, but also the same kind of school structures that hadn’t been that way in decades past,” a mom told Breitbart News. “How they function and how they are administrated is no longer … individual [to each school]. They’re all very, very similar. And in fact, some of them use identical language … and that is very fishy. And then once we did our research, we realized that it’s because it’s coming from these centralized sources with NAIS acting as a cartel.”

The main source identified by the inquiring moms is the NAIS, the national accreditation association for private schools across the country, which is registered as a 501(c)(3) and is technically prohibited from engaging in political advocacy in official capacity.

“[F]or their organizations to remain tax exempt under section 501(c)(3), leaders cannot make partisan comments in official organization publications or at official functions of the organization,” the IRS website says.

The NAIS was formed in 1962 — much younger than many of the schools it accredits — and then has regional accreditation associations that branch out from the national organization.

When the moms investigated what factors are considered in accreditation, they found “two thirds of it was focused on social justice, diversity, equity, inclusion, and nothing about it was focused on actually educating the kids.”

The NAIS statement on Vision, Mission, and Values for 2021 says values include “embracing diversity, championing inclusivity, and empowering community.”

“All learners find pathways to success through the independence, innovation, and diversity of our schools, creating a more equitable world,” the NAIS Vision statement says.

“When schools implement diversity, equity, and inclusion initiatives, they often seek to re-educate employees on their awareness of such issues as implicit bias and white privilege,” a summary of the annual NAIS teacher training, reviewed by Breitbart News, says.

A NAIS Trustee Handbook called “Diversity Work in Independent Schools,” reviewed by Breitbart News, provides tips for schools on how to work around federal laws prohibiting student admission based on race.

“You need a justification for an admissions policy that includes considerations of race. A justification might include noting that diversity has ‘substantial’ benefits in your education environment, including preparing students to live in a diverse working world, breaking down stereotypes, and encouraging invigorating classroom discussion,” the manual says.

The NAIS “Hopes and Fears” Handbook, for sale on their website, describes certain parents the association calls “The 5 Percenters” — a group the “Undercover Mothers” would presumably be included in. 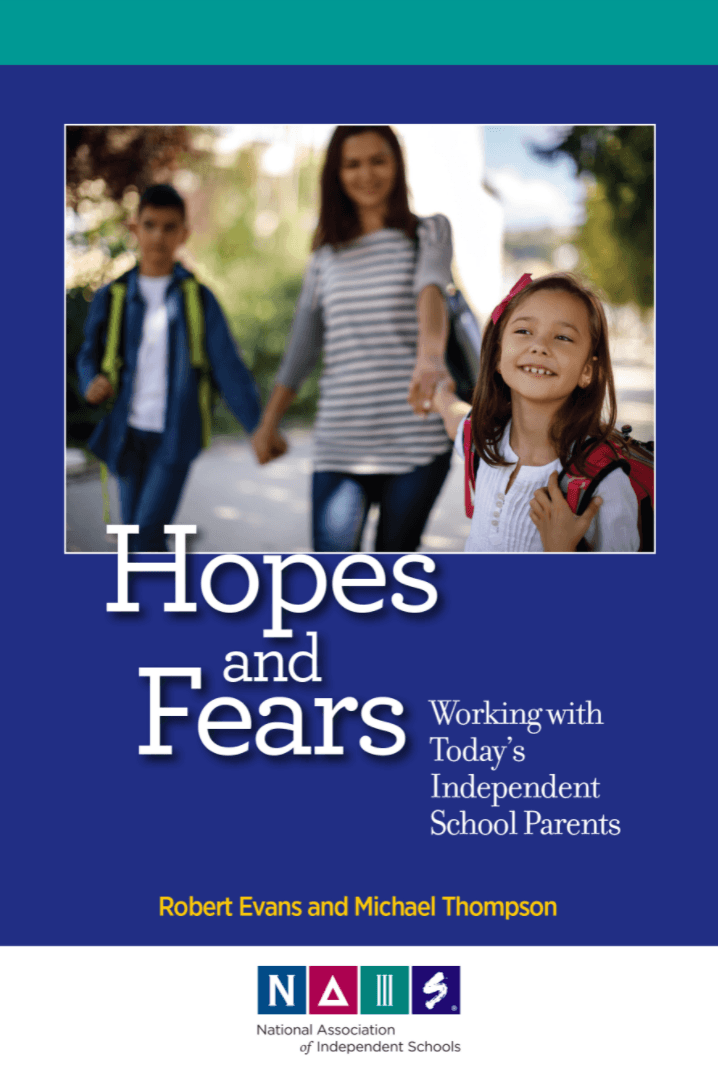 The cover of the NAIS “Hope and Fears” handbook

“The parents we call 5 percenters are different. Very. They cannot be soothed or reasoned with, no matter how hard the school tries. For a number of sad psychological reasons, they provoke and sustain an abrasive, aggrieved, unhappy, mistrustful relationship with the school, sometimes for years,” the manual says.

“Educators often find it very hard to understand why some parents cannot form and sustain a cooperative, trusting relationship with them. One immediate cause is mental illness,” the explanation of the “5 percenters” continues.

NAIS did not respond when reached for comment by Breitbart News.

Through further research, mothers in the group also found educational consultant Carney, Sandoe & Associates, which they discovered is responsible for recruitment and placement of headmasters at private schools across the country.

Carney, Sandoe & Associates, on their website, boasts a commitment to “the importance of increasing equity, diversity and inclusion — both within our own organization and among the educational communities with whom we partner,” and offers “implicit and cognitive bias training for search committees” as part of their services.

Carney, Sandoe & Associates did not respond when reached for comment by Breitbart News.

The group of concerned moms keeps up a newsletter on substack, which chronicles their observations and findings on the private school system and aims to expose NAIS and sound the alarm to other parents. The newsletter has seen exponential growth since Thanksgiving, receiving 10,000 views on posts within 24 hours of publishing.

“We are a Mom Collective with children in independent schools. We circle our young to protect them from the abuse being inflicted by schools and the cartels of the regional and National Association of Independent Schools,” their bio on substack reads.

“Parents need to be aware of what NAIS is and what their long-term goals have been and where they’re going, and then the parents need to pressure our own schools to cut ties with NAIS and then take our own schools back — with more transparency in selecting trustees, and allowing the parents to have a voice and be a real partner, instead of just saying that they’re partners in school leadership and management,” one of the moms told Breitbart News.

The mothers are raising alarm about schools’ effort to alienate their kids from them, as the school assumes increasing responsibility for child rearing and conceals from parents what the kids are learning.

“NAIS schools now say to you, ‘you hand your child to me, you, as a parent, you’re now called a caregiver, and you only write the tuition check, and you only donate … money … you do that, and we are [in charge of] the moral, ethical development of your child; we decide if your child is a boy or a girl, and to what extent you are privy to that information; we teach them moral character; we tell them that your moral character is wrong, is outdated.’ … So they are doing exactly nothing of what they promised. And NAIS has captured institutions and is doing exactly what public schools, the Board of Education, wants to do to the schools, which is to remove parents and put them outside the classroom, outside of the school altogether,” another mom continued.

The informal and independent group has participants from all across the political spectrum, including a number of moms who were once politically active Democrats.

“I was a Democratic donor, I was a nonprofit board member, I have emails and correspondence with the biggest progressives in this country, you know, we were on first name basis, I would socialize with them,” another mom from New York City explained.

“You can quote me on this,” she continued, “They don’t want to mess with us to the level where they want to expose us and go after us individually, because if they do a simple political giving search, they will see that so many of us maxed out to Obama, maxed out to Hillary, and that’s going to look really bad because their narrative is that this is a far right-wing conspiracy, and ’they’re ginning up their base before the midterms,’ — that is not the case.

“There are more [Undercover Mothers] in our midst who have been in a room with [House Speaker] Nancy Pelosi, in her office at the Capitol or at fundraisers, sat across from [Sen.] Kirsten Gillibrand … and many other progressive Democrats … than they would prefer to see,” the New York City mom went on.

“We are the mothers of America. We’re every race, religion, ethnicity, whatever you want to say — we’re the mothers of America. That’s all we are. We just care about our children. We care about the future for our children in this country. And we are super, super dedicated,” a third mom added, as she washed dishes while on a call with Breitbart News.