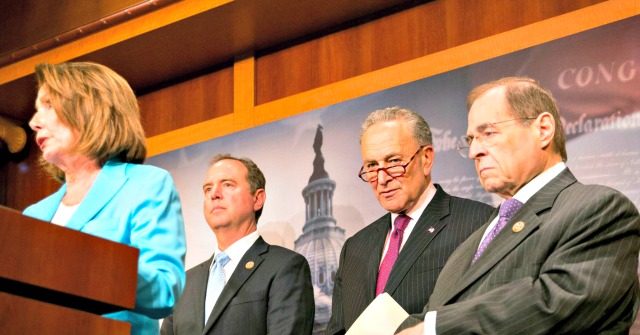 “Nancy Pelosi put Adam Schiff and Jerry Nadler at the top of two of the most powerful committees in the House and they now have a severe credibility problem,” Murtaugh said in an email. “They were leaders of the two-year effort to lie to the American people, while the Speaker of the House sat silently and let them do it. Any investigations they undertake are hopelessly tainted by their repeated and egregious spreading of the malicious collusion hoax. Speaker Pelosi should have to answer for their actions.”

This comes in the wake of a memo that Murtaugh on behalf of the Trump campaign is circulating to top television producers at major networks casting doubt on several top Democrats’ credibility, including that of Nadler and Schiff–who Pelosi handpicked to lead the Judiciary and Intelligence Committees, respectively.

“As you know, Special Counsel Robert Mueller’s report found that no one associated with President Donald J. Trump’s 2016 campaign colluded with Russia, despite repeated offers from Russia-linked operatives,” Murtaugh, the Trump campaign’s communications director, wrote in the memorandum to major network producers. “The Special Counsel also made no recommendation on obstruction, which is a decision in itself.  Using the information provided by Mueller, the Attorney General and Deputy Attorney General determined that there was no obstruction. This is all the result of the Special Counsel’s 2,800 subpoenas, 500 search warrants, 500 witness interviews, 40 FBI agents, 19 lawyers, and $25 million in taxpayer funds. The only way to interpret these conclusions is as a total and complete vindication of President Trump. The issuance of these definitive findings comes after two years of Democrat leaders and others lying to the American people by vigorously and repeatedly claiming there was evidence of collusion.  They made many of these false claims, without evidence, on your airwaves.”

The memo then cites a number of Democrat guests who “made outlandish, false claims” alleging falsely that Trump and his 2016 campaign colluded with the Russians, including most notably Schiff and Nadler.

“I think there’s plenty of evidence of collusion or conspiracy in plain sight,” Schiff said on CBS This Morning on Aug. 8, 2018, for instance.

“There was obviously a lot of collusion,” Nadler said on Erin Burnett Outfront on CNN on Oct. 27, 2017, as quoted by the Trump campaign. “The question is how high. Every day we – every day – every so often we get new information about involvement.”

READ THE FULL MEMO FROM THE TRUMP CAMPAIGN TO TELEVISION PRODUCERS:

The Trump campaign is sending this memo to TV producers: pic.twitter.com/yhr03LAI7N

Both of those statements–and others highlighted by the Trump campaign from top Democrats like Sen. Richard Blumenthal (D-CT), Rep. Eric Swalwell (D-CA), Democratic National Committee chairman Tom Perez, and former CIA director John Brennan–were proven to be false and misleading when Special Counsel Robert Mueller concluded his investigation and found no collusion between Trump and the Russians.

“[T]he investigation did not establish that members of the Trump Campaign conspired or coordinated with the Russian government in its election interference activities,” Mueller’s report reads, as quoted by Attorney General Bill Barr in his letter summarizing its findings to top congressional Judiciary Committee leaders.

The Trump campaign is hardly the only power on the right to put the heat on Pelosi over repeated lies from Schiff and Nadler during the course of this investigation. House Minority Leader Rep. Kevin McCarthy (R-CA), for instance, on Monday called multiple times for Schiff to step down as the chairman of the Intelligence Committee in the wake of misuse of committee power and misleading statements he made to the public.

“[Schiff] owes the American public an apology,” McCarthy said in an interview with Politico. “Schiff has met the standard that he has imposed on other members of Congress of when they should step back from their positions. He has exceeded that standard, and there is no question he should step down from the Intel chairmanship.”

While Schiff himself has not responded to the calls for his resignation over his misconduct in these matters per Politico, a Pelosi spokeswoman did defend him for now.

“Democrats aren’t going to be intimidated by the White House or Congressional Republicans, we’re not going to be distracted from securing the release of the full Mueller report and the underlying evidence, and we will continue to pursue legitimate oversight because that’s what the Constitution requires,” Pelosi spokeswoman Ashley Etienne said in response to McCarthy’s call for Schiff’s resignation from the Intelligence chair position, per Politico.

@RepAdamSchiff is a LIAR whose lies help our Enemies.

He should resign immediately. https://t.co/BF630hxA6h

The president’s son Donald Trump, Jr., has also ripped Schiff, saying his repeated leaks and lies–as well as other misconduct–tarnish the reputation of the House Intelligence Committee:

Well, he can always show the American public all the evidence he says he’s seen. That would clear thing up. Otherwise he’s just a disgrace to the position.

Between the lies and the leaks why would anyone in their right mind ever trust The House Intelligence Committee again??? https://t.co/TXiNx3JfW1

Couldn’t agree more with my friend @GOPLeader. After spending 2 years lying to the American people about the collusion conspiracy, this truther is STILL doubling down on his lies. He’s a hack & serial fraud.

If he had an ounce of integrity, he would resign today. #FullOfSchiff https://t.co/3fuBI4TGvy

Others have zoned in on serious problems with how Schiff has handled himself as well:

.@GOPLeader & @KellyannePolls are right to call for serial liar & fraud Adam Schiff to resign as head of the Intel committee

After spending 2 years lying to the American people & promoting the collusion conspiracy, he’s lost the moral authority to leadhttps://t.co/HEsT5CwfTF

It remains to be seen what will happen with Schiff, but the longer he lingers the less credibility Pelosi has–and Trump world and Republicans are sure to exploit that weakness time and again.