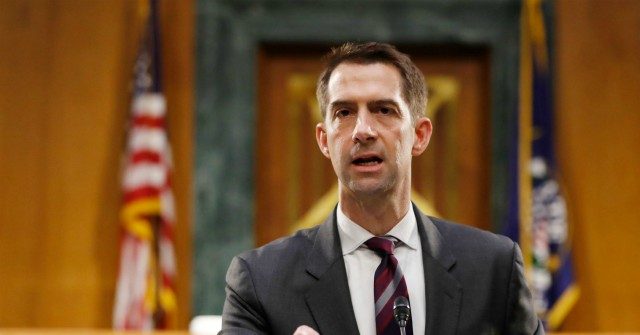 “Police officers are being unfairly demonized across the country as calls for defunding departments grow, despite the fact that the vast majority of officers are selfless public servants who are already underfunded,” Sen. Cotton told Breitbart News. “It’s never been more important to recognize those officers who exemplify the best kind of policing. My bill will reward the policemen and women who are working hard to improve their service and win the public’s trust.”

Cotton’s Better Community Policing Recognition Act comes as President Donald Trump on Tuesday rolls out an executive order on police reform and while Congress more generally debates the issue in the wake of the killing of George Floyd in Minneapolis.

The bill, Cotton’s office told Breitbart News, aims to reward and incentivize good cops, rather than just demonizing bad cops like the Democrats, the left, and the establishment media keep doing.

It would create an annual $5 million fund from which officers at the state, local, and tribal level nationwide would be eligible for nomination for cash rewards for exemplary policing practices. It would allow their local police departments or state attorneys general to nominate officers who, according to Cotton’s team, “exemplify best practices or come up with significant innovations to reduce the excessive use of force or improve community policing strategies.”

“Those officers who go above and beyond to make their communities better and safer for everyone would be eligible to be nominated by their local police department or by their state attorney general,” Cotton’s team told Breitbart News.

Then the Justice Department would select winners from the nearly 18,000 police departments across the country for cash awards to be given out to these officers through the newly created $5 million annual fund.