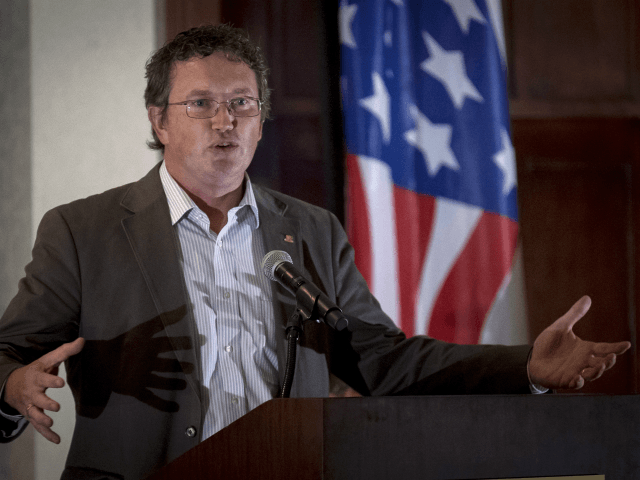 Rep. Thomas Massie (R-KY) told Breitbart News in an exclusive interview on Wednesday that lame-duck House Speaker Paul Ryan endangers the Farm bill by including a rule that prohibits a vote on America’s involvement with Saudi Arabia’s war in Yemen.

One of House Republicans leadership’s final acts of this congressional term includes adding a rule on the Conference Report for the 2018 Farm bill which would block a potential War Powers resolution vote on America’s involvement in Saudi Arabia’s war in Yemen. The House plans to vote on the Farm bill on Wednesday, leaving Massie and other America First foreign policy lawmakers limited time to fight against Ryan’s move to block their Yemen resolution.

The Armed Conflict Location and Event Data Project (ACLED), found that the death toll for the was roughly 56,000 lives as of October.

The House Rules Committee released a rule on the conference report for the Farm bill, which includes a rule that the War Powers resolution does not apply to Yemen, which would spark a debate on whether the United States should remain engaged in the foreign war in the Middle East.

Massie chastised Speaker Paul Ryan, charging that the House Republican leadership should not jeopardize American farmers just to block a vote on a resolution condemning America’s involvement in Yemen.

“This is definitely not America First. We shouldn’t be spending our blood and treasure in the Middle East, and furthermore on another level, we shouldn’t be jeopardizing the passage of domestic policy and domestic spending with a foreign policy/ war issue,” Massie told Breitbart News. “In other words, if you’re putting America First, why would you jeopardize passage of the Farm bill by sneaking in the War in Yemen through the Farm bill?”

“It’s not America First; it’s not putting America’s farmers first,” Massie added. “I don’t’ think they would be excited find out that Paul Ryan used their bill to pull these shenanigans.”

Does your Congressman know what’s hidden in a procedural vote on the Farm Bill today? Does he or she care? To avoid a debate on whether the US should be involved in a war in Yemen, today our leadership will trick members into suspending the provisions of the War Powers Act. SAD! pic.twitter.com/PVziN9d2lP

Khanna also released a video statement on Twitter on Wednesday, calling on Congress to end American involvement in Saudi Arabia’s “horrific war” with Yemen. “We need to end this war,” charges in the video.

14 million people are on the brink of famine in Yemen. 85k children have already died from cholera and starvation. Our Yemen War Powers Resolution can’t wait until 2019. We must pass it now to save lives. pic.twitter.com/09huQbuw5k

Jason Pye, the vice president of legislative affairs for FreedomWorks, noted on Twitter on Tuesday night, “Well, one of House Republican leadership’s final acts will be to block a vote on the Yemen war powers resolution. House Republican leaders are determined to have the U.S. own our role this bloody conflict and humanitarian disaster in which we have no business being involved.”

The Kentucky Republican told Breitbart News that this was the second time House leadership blocked a War Powers resolution on Yemen; Ryan blocked a resolution by Massie and Rep. Khanna in November by including language in the Manage Our Wolves Act that would block a vote on America’s involvement in Yemen.

Massie said, “If you think we should be aiding Saudi Arabia in their war in Yemen or not, I don’t know if you can defend putting this in a procedural vote on the Farm bill.”

The Kentucky Republican said that he hopes to separate the Farm bill vote with the Yemen resolution so that they could have a vote on America’s involvement with Saudi Arabia’s war.

Further, the Kentucky conservative suggested that America should have no involvement with the Saudia Arabia’s war in Yemen because the 2001 Authorization for the Use of Military Force (AUMF) does not authorize American involvement in the war.

“I would contend that the AUMF that authorized our activities in Afghanistan and elsewhere does not apply here. I don’t think there is an AUMF that covers our assistance to Saudi Arabia’s war in Yemen. Congress has completely abdicated its responsibility to authorize deauthorize this activity,” Massie charged.