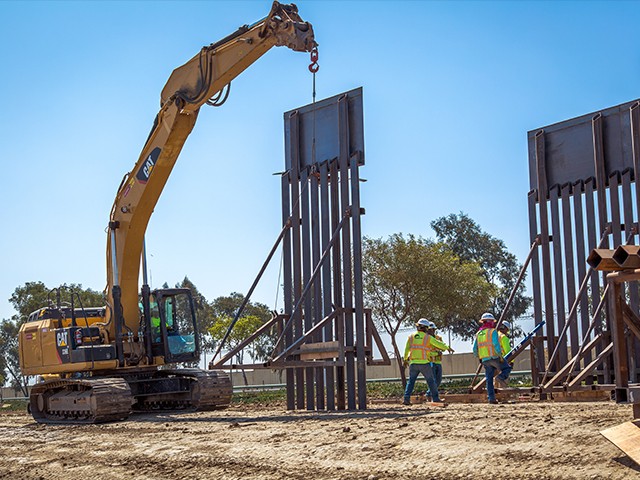 Sen. Jim Inhofe (R-OK) told Breitbart News in an exclusive interview on Wednesday about his new legislation, the Wall Bill, which President Donald Trump tacitly endorsed. The bill would fully fund a wall on America’s southern border by cutting off illegal immigrants’ access to American welfare and tax credits.

Inhofe told Breitbart News the bill would fully fund the border wall by cutting off illegal aliens’ access to welfare benefits and tax credits. He said the bill would fulfill President Trump’s promises to both fund and build his southern border wall and have Mexico, or Mexican illegal immigrants, pay for it.

“Here’s the fun part: you’re taking the money out of people that are not entitled to something from this country, but there has been a lot of criticism of the president that it [the wall] is going to be paid for by Mexico. Well, this is. This is paid for by Mexicans or by foreigners who are in here fleecing our government,” Inhofe told Breitbart News. “So you can say to simplify it: it’s paid for by Mexicans because most of them who are coming in are coming even if they are not Mexicans, are coming through the Mexican border”:

The Oklahoma senator told Breitbart News about how he came up with the idea to cut off illegal immigrants’ access to welfare to pay for the border wall.

Sen. Inhofe explained, “We were collectively working on it, and, as everyone knows–and I agree–we need the wall, and you have to pay for the wall. We have an unfriendly Democratic party on the wall issue, and so our thinking was that we have to come up with some way that makes perfectly good sense to the American people that would be opposed by the Democrats but would also be very hard to oppose it.”

Inhofe continued, “Second, essentially, what we do is take those benefits that are going to illegals, and in other words, people that are not citizens and those are the ones that are cheating our taxpayers, taking the money, and instead of giving it to them, we are keeping it for ourselves to build the wall. Now, it works out that this is as an example, a Child Tax Credit or other similar tax credits, actually go to the child and don’t go to the parent; the parent is the one that ends up getting the money.”

Inhofe, the chairman of the Senate Armed Services Committee, told Breitbart News he knows the problems that plague our southern border so well because he has been involved in developing property in southern Texas for two decades, adding that former President Barack Obama’s actions have only increased illegal immigration. Sen. Inhofe said Obama wanted more immigration to increase the demographic power of the Democrat party.

“The reason I’m so familiar with this is that I spent 20 years of my life as a builder and developer in far south Texas on the Mexican border. I know how they work down there.” He went on to say that Obama’s motivation was that “the people that they allowed to come in from other countries are all going to vote Democrat. Now, you can debate that because all of them are Catholic, pro-life, but, nonetheless, that’s his view.”

The legislation would also require that states use E-Verify to confirm that only legal citizens can receive welfare benefits from programs such as Supplemental Nutrition Assistance Program (SNAP), otherwise known as food stamps, Temporary Assistance for Needy Families (TANF), and Housing and Urban Development (HUD) programs. The legislation would also increase the minimum fines on illegal border crossers and establishes a minimum penalty for visa overstays.

The non-partisan Joint Committee on Taxation (JCT) released an analysis on the bill, which found that the Oklahoma senator’s legislation would save $33.5 billion over the next ten years. This would more than pay for President Trump’s wall, which will cost roughly $25 billion. According to the JCT, the bill would pay for Trump’s requested $5 billion in border wall funding for the December spending bill by 2021.

During the interview with Breitbart News, Sen. Inhofe explained that President Trump supports the legislation. Sen. Inhofe said he told the president about the bill during a meeting on Tuesday, explaining to Trump about his innovative solution to paying for the wall. Inhofe said Trump thought highly of the legislation and subsequently asked his staff to look into the idea further.

The legislation already has the support of three conservative members of the Senate, including Sens. Ted Cruz (R-TX), Mike Rounds (R-SC), and John Kennedy (R-LA).

“I have long called for building a wall as a necessary step in defending our border and stopping the flow of illegal immigration into our country,” Cruz said in a statement on Thursday. “The overwhelming majority of Texans and Americans want to see the border secured. The WALL Act would fully fund the border wall by closing existing loopholes that provide illegal immigrants with federal benefits and tax credits, without affecting the benefits and tax credits used by Americans.”

“We can certainly afford the construction,” said Sen. Kennedy. “Sen. Inhofe and I are teaming up on legislation that will save taxpayers $33 billion simply by ensuring that the taxpayers’ generosity isn’t wasted. If you want to receive food stamps and other benefits, then you should prove your citizenship. If you cross the border illegally or overstay your visit to this country, then you should pay a stiff penalty.”

The primary responsibility of the federal government is the defense of our nation, which includes strong border security. The WALL Act will provide full funding for construction of a physical barrier along our southern border to protect against illegal immigration and stop those who wish to do us harm, such as terrorists, gang members, and drug dealers, from entering the United States from the south. It pays for the wall by closing existing loopholes that allow illegal immigrants to receive federal benefits and increasing fines for illegal border crossings and visa overstays. By funding the wall through increased fines, we prevent any risk of dipping into the Department of Defense (DoD) funding, which is already stretched thin. I thank Chairman Inhofe for his leadership on this effort, and I look forward to advancing this proposal in the Senate.

Inhofe also drafted the legislation to complement the Asylum Abuse Reduction Act that the senator introduced in August, which would close asylum loopholes and improve the integrity of the asylum application process.

Under current law, migrants who cross the border and declare asylum are released pending credible fear screenings and other legal procedures; however, they rarely show up for proceedings, often never completing the asylum process. Asylum applications have risen dramatically over the last decade, creating a huge backlog on the immigration court system. The Asylum Act would require individuals to seek asylum and begin their credible fear screening at an embassy or consulate outside of the United States before consideration for admittance under American asylum laws. The bill would also create a criminal bench warrant for illegal immigrants who fail to appear for immigration court, contrary to current law.

Sen. Inhofe explained that the American people will get excited when they “find out that the wall can be built and it won’t cost them a cent and it is going to be paid for by Mexicans in the country illegally. Doesn’t get any better than that.”