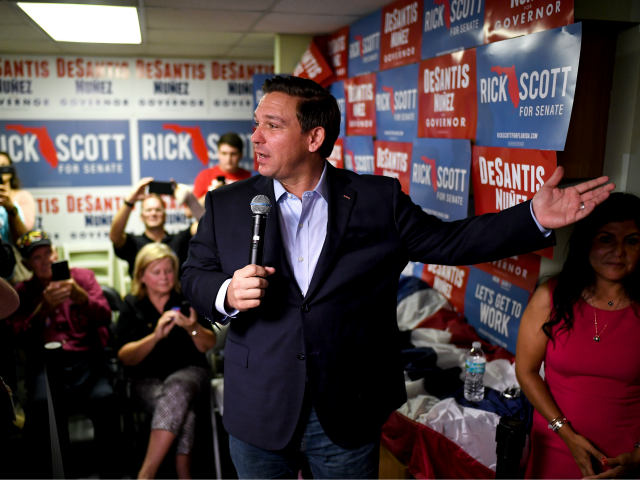 Miami, Fla. — Florida Republican gubernatorial candidate Ron DeSantis pledged to appoint to the state’s Supreme Court “solid constitutionalists who understand the proper role of the court is to apply the law in the Constitution as written.”

Speaking in a Breitbart News interview, DeSantis warned that his opponent, Andrew Gillum, could appoint liberal activist judges who “rewrite the Constitution” and “impose their personal philosophy on the rest of this state.”

Florida’s Supreme Court ruled last month that the next governor would appoint three new justices due to pending retirements. All three retiring justices are liberal in a state system that has seven justices — four lean liberal and three are considered constitutionalists.

This is a once in a generation opportunity. In spite of having elected nothing but Republican governors since ‘98, we have for 25 years had a liberal activist majority on the State Supreme Court. There are various reasons for why it worked out that way but bottom line is that the way things stand now there are four liberal activists and three constitutionalists. A seven member court divided 4-3.

We have mandatory retirement based on age for our judiciary and so you have three of the four liberal activists who are retiring the same time Governor (Rick) Scott leaves office. And so I come in and I am able to not only appoint three justices but these are three justices who are going to replace three liberal activist judges. So I will appoint solid constitutionalists who understand the proper role of the court is to apply the law in the Constitution as written. Not to rewrite the law.

And so these will be justices in the mold of Clarence Thomas on the U.S. Supreme Court. And when I do that successfully, we will transform the court to a six-to-one constitutionalist court and then in one four-year term you get to replace the one remaining liberal activist. So you could serve one term as governor and leave the court seven to zero.

“That will be a huge, huge change for the better and we will have effectively ended judicial activism in Florida for a generation,” DeSantis added.