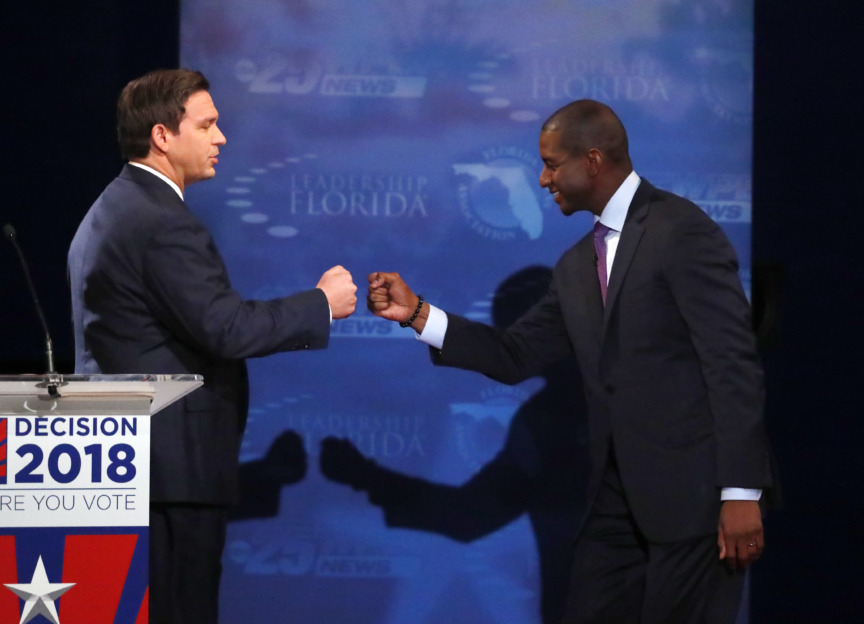 ORLANDO, Fla — In the aftermath of the deadly shooting massacre at the Tree of Life Synagogue in Pittsburgh, Florida gubernatorial candidate Ron DeSantis renewed his call for Democratic opponent Andrew Gillum to publically disavow the radical Dream Defenders organization.

“He will not disavow them because this is who he is,” stated DeSantis, speaking in an exclusive interview with Breitbart News. “I mean when they are saying he is part of the movement they are not lying. He is one of them.”

The candidate not only called for Gillum to disavow Dream Defenders, DeSantis challenged his opponent to demand that the organization stop aiding Gillum’s election efforts from the outside.

DeSantis was referencing Gillum’s close personal and professional relationship with Dream Defenders, an anti-patriotic, anti-capitalism, anti-military, anti-police organization that has engaged in activist efforts to promote the boycott of Israel. Gillum has talked about aiding the group’s activism, signed the organization’s pledge referencing an anti-police document and has personally written in strong support of Dream Defenders and its co-founder, Phillip Agnew. In turn, Agnew himself recently described a close working and personal relationship with Gillum and said he considers Gillum to be “part of the movement.”

DeSantis stated that “not only have they (Dream Defenders) endorsed him and they are helping him, but he endorsed them from the debate stage just a few months ago in the Democratic primaries. He did it unprompted.”

Indeed, Gillum was taped at a June debate saying that he is “pleased and proud” to have sneaked food to Dream Defenders activists during a 30-day sleep-in protest at the Florida State Capital, referring to a 2013 month-long anti-gun protest in the wake of the Trayvon Martin shooting. “I hope you keep at it,” Gillum said of Dream Defenders activists during a June event.

“I would never accept an endorsement from a group whose mission was to boycott Israel,” DeSantis told this reporter. “And I certainly wouldn’t offer them my endorsement in any way, shape or form.”

I mean, they are definitely anti-Israel. I would say they are anti-Semitic because they embrace the BDS movement which is anti-Semitic and I am not aware of Dream Defenders trying to boycott any other country in the world. Not Iran, the world’s largest state sponsor of terrorism. Not any of these other rogue states. It is the world’s only Jewish state that they seek to boycott.

And they actually sponsored trips to go to Israel and they do these flash mobs and they protest Israel. It is really, really bad. That is just one of the things. They want to replace capitalism with principles that are so radical they would make Hugo Chavez and Nicolás Maduro blush. And that is something that Gillam signed his name to.

And I am just thinking to myself the people who stormed the beaches of Normandy to defeat the Nazis, they were not bullies. They saved the world. And America’s military has been a force for good. And yet for Dream Defenders, they think that America is a bully and that we need to radically reduce defense spending. So just across-the-board they are just so radical and just offensive certainly to most people in Florida who are good.

The Republican candidate’s description of Dream Defenders is accurate.

Breitbart News reported that Dream Defenders organized a flash mob in Israel to officially endorse the Boycott, Divestment and Sanctions (BDS) movement against the Jewish state.

In June, Gillum signed a Dream Defenders pledge that contains specific language stating “I pledge my support to the Freedom Papers.”

The organization’s “Freedom Papers,” in turn, exclaim that “police and prisons have no place in ‘justice.’”

The “Freedom Papers” also advocate textbook socialist principals such as claiming that “by virtue of being born each of us has the absolute right to adequate food, shelter, clothing, water, healthcare, effective public transportation, dignified work, living wages.”

In its endorsement of Gillum, Dream Defenders summarized the aims of its “movement” as no less than the replacement of the current state with a “people-centered” state — a clear euphemism for socialism.

As Breitbart News reported, a simple perusal of the website of Dream Defenders, the organization so feverishly championed by Gillum, evidences the group’s open radicalism. The organization calls for an “end” to “disaster capitalism,” rants against Independence Day and spreads malicious falsehoods about Israel.

The main page boasts that Dream Defenders is “building a powerful, deep, local, organization and movement for freedom and liberation in Florida.”

Gillum previously posted a picture of himself on Facebook posing with Phillip Agnew, the co-founder of Dream Defenders. “Ran into two Rattlers today at CBC,” reads Gillum’s caption on the photo, dated September 25, 2014. “Could not be prouder of Phillip Agnew and commissioner Keon Hardemon.”