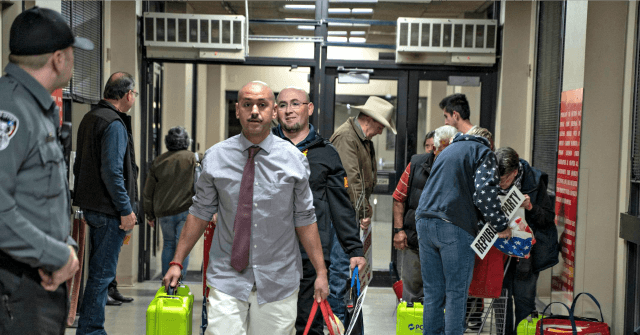 Rep. Rodney Davis (R-IL), the ranking member of the House Administration Committee, told Breitbart News in an exclusive interview on Tuesday that mail-in voting and ballot harvesting are “ripe for corruption.”

Davis spoke to Breitbart News about what he believes are the dangers of mail-in voting. The House Administration Committee has sounded the alarm over the problems that arise from mail-in voting, which he believes could lead to fraud, abuse, and lack of transparency. He has raised concern about ballot harvesting, which could allow political operatives and others in states such as California to collect voters’ ballots and hand them in en masse. Ballot harvesting has engendered bipartisan criticism regarding election watchdogs.

Davis told Breitbart News, “I’m very concerned, and it’s ironic that we’ve had the same election reforms that we’ve had in the disastrous H.R. 1; the same election reforms that have been proposed by Democrats for every coronavirus bill. Now, if it was proposed last January before everyone knew that coronavirus existed, why is it an emergency now? And when you look at some of the plans that they have proposed, which is nationwide mail-in voting and nationwide ballot harvesting, we’ve seen examples of political operatives taking advantage of the ballot harvesting process and fraudulently making sure that ballots don’t get to the ballot box. It’s wrong; it’s ripe for corruption. It’s been corrupted.”

President Donald Trump has emphasized that mail-in voting would lead to politicians cheating during elections. He said that Americans should have to vote using a verified license or I.D.

“I think a lot of people cheat with mail-in voting,” Trump said during a press conference in April. “I think people should vote with I.D., with Voter ID.”

Davis has detailed that vote-by-mail has led to voter confusion, fewer polling stations – which have led to long voting lines – overwhelmed election administrators, and post offices that came from June’s mail-in vote primaries.

For instance, Davis noted that Washington, DC; Pennsylvania, and Indiana had reports of voters that applied several times for mail-ballots, duplicate ballots, ballots that were not signed, amongst other issues.

Further, the District of Columbia’s focus on mail-in voting decreased the number of polling stations from 144 to 20, which led to long voting lines. Maryland’s focus on limiting in-person voting resulted in long lines and clustering of voters.

Voters in D.C., Maryland, and Rhode Island reportedly did not receive their mail-in ballots or struggled to submit requests in those locations.

The Baltimore Sun reported that Maryland Lt. Gov. Boyd K. Rutherford called on the state board of elections administrator to resign after the mail-in primary and special election problems ended up in 75,000 ballots disappearing from the state’s website, ballots containED inaccurate postage instructions, ballots arrived weeks late, and multiple ballots were mailed to the same household.

Davis emphasized in his interview with Breitbart News that states can implement a proper mail-in voting system if given enough time. For example, he noted that Washington state Secretary of State Kim Wyman told her that “it took her state five years to implement an entire vote-by-mail program.”

Davis said that rushing towards a mail-in voting system before the November elections will cause “tremendous problems.” He explained that Wyman “and I both agree that there are states that, like Alabama and Lousiana, where we heard from their secretaries of state that they have anywhere of two percent to four percent that utilizes absentee ballots or mail-in ballots now. Moving them to an all mail-in voting state is going to cause tremendous problems. It will continue to give us an election day we get results after election weeks, those are things that the American people don’t want to see, and I believe we can get people to utilize whatever form of voting that they feel is better for them, and then we can talk about implementing more strategies like vote by mail like my home state Illinois already has.”

Davis then said that instead of implementing a rushed mail-in voting system, states should focus on implementing socially distant practices to vote safely in person.

“We can allow people to cast their vote in November in a very safe, socially distancing manner. We can encourage states to put their programs together in a way that will work for their state, not just because the federal government has told them to do it and forcing the states to do it that are no way near ready to count all of those ballots.”