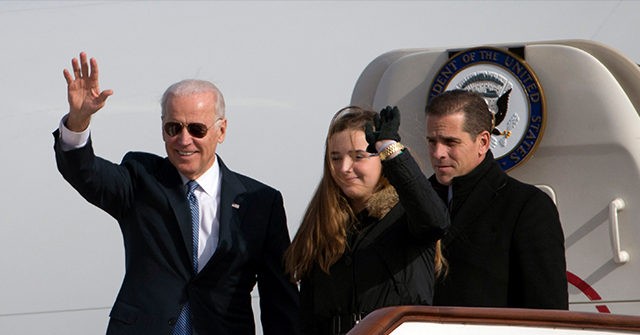 Former Acting Director of National Intelligence Richard Grenell called for the Biden family’s ties to the Chinese Communist Party to be investigated by a special counsel during an exclusive interview with SiriusXM’s Breitbart News Saturday.

“There should be a special counsel just on the Hunter Biden laptop alone,” Grenell said, referring to Hunter Biden’s laptop that revealed deep financial ties between the Biden family and CCP-linked Chinese businessmen.

“We’ve got a lot of smoke and it seems like there’s, there’s a whole bunch of fires around the Biden family that have way too close of ties to the Chinese Communist Party and members. And I’m very concerned about that. And I’m so thankful that people like [Rep. Lisa McClain (R-MI)] are pushing back,” he added.

Grenell said he was working with McClain, who recently introduced a bill called the Stop CCP Act, which would sanction members of the CCP and their relatives. The congresswoman told Breitbart News Saturday earlier, “It’s not surprising to me that Joe Biden is not tough on China. I mean, think about it, his family profits from them.”

McClain said she also believed a special counsel is necessary. “There’s going to be a lot of oversight” if Republicans regain control of the U.S. House of Representatives after the 2022 midterms,” she said.

“Almost all Democrats, but certainly all anti-Trump people…signed a letter saying, ‘Don’t look at Hunter Biden’s laptop. Don’t take it seriously because it’s Russian disinformation.’ Now that is the Beijing line. The Chinese have wanted us to not pay attention to this laptop or the accusations of corruption or the ties to the Biden family,” Grenell said.

It was one of the galling things for me to watch these intelligence so-called experts, people like Leon Panetta, who signed this letter saying, don’t even look at at, at that laptop. There is evidence showing the corruption into the Biden family with the Chinese and I don’t understand why the Senate and House members aren’t much more clear-eyed and aggressive about getting to the bottom of this.

“The evidence is there, the media is clearly not interested in highlighting it. It’s terrible that there’s only one book highlighting this connection,” he said.