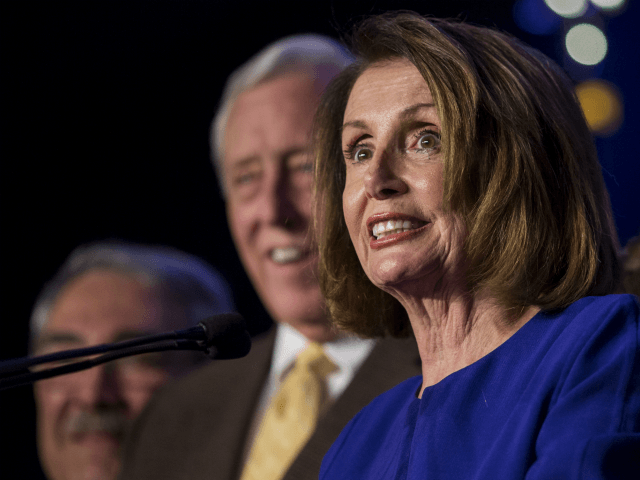 Rep. Tom Reed (R-NY) told Breitbart News Sunday that unless Rep. Nancy Pelosi (D-CA) backs bipartisan reforms to empower rank-and-file lawmakers, she will likely not become the next Speaker of the House.

House Problem Solvers Caucus co-chairman Reed told Breitbart News Sunday host Amanda House about his group’s proposal to back Pelosi for Speaker for the House should she adopt their bipartisan plan to empower more House members.

Reed, who represents a caucus of 48 Republicans and Democrats, proposed a rule change dubbed “Break the Gridlock,” which would give more power to the average lawmaker. Rep. Reed said that the rule would “change the rules of the House to get it to function for the American people again,” by allowing a floor vote on any legislation that 290 House members, or two-thirds of the House, have cosponsored, bypassing any attempts from House leadership from blocking the bill from moving to the House floor for a vote.

Reed also said that the proposed opening up the amendment process to legislation to allow for more rank-and-file members to have a greater saying in drafting legislation.

The New York Republican said Pelosi continues to struggle to get enough in her own Democrat conference to become Speaker and that Republican Problem Solver Caucus members may back her if she adopts these rule changes.

“Nancy Pelosi has a major problem on her hands,” Reed contended. “It’s not just the 18 anti-Pelosi Democrats, but there’s a group of Democrats that are standing with us that are also opposed to her absent her commitment to these rules of the House. So, she has a real math problem.”

House and Reed then mentioned that President Donald Trump has “indicated his willingness to put her in the position,” in a tweet last week that also tagged Congressman Reed.

Trump wrote, “I can get Nancy Pelosi as many votes as she wants in order for her to be Speaker of the House. She deserves this victory, she has earned it – but there are those in her party who are trying to take it away. She will win! @TomReedCongress.”

I can get Nancy Pelosi as many votes as she wants in order for her to be Speaker of the House. She deserves this victory, she has earned it – but there are those in her party who are trying to take it away. She will win! @TomReedCongress

The New York Republican said that he appreciated that the president is recognizing “what we’re standing for,” suggesting that Trump serves as a “disruptive force” who will “continue to shake up the establishment.”

Reed noted that the House Republican leadership did not do anything to change the rules to empower rank-and-file Republicans.

“Once the power rises to the top it’s very difficult to claw it back,” Reed contended.

Reed said that if Pelosi were to agree to these rules changes, conservatives can have more say even with a minority in the House of Representatives.

“At least we would open the floor of the House that we would have votes on policy issues that would never have the light of day under the existing rules under a Pelosi speakership or a Democratic speakership and what we would have is at least a conservative alternative to be debated and to have the American people to see the wisdom of our positions and what we bring to the table for the American people,” Reed concluded.