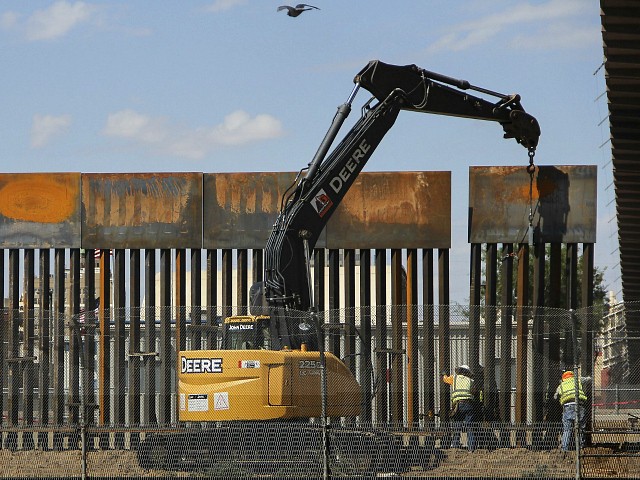 Rep. Jody Hice (R-GA) told Breitbart News in an exclusive statement on Tuesday that Republicans “need to deliver” on their commitment to President Donald Trump to secure $5 billion in border wall funding this December, cautioning that a late December deadline may make it harder for the president to secure more funding.

The latest report suggests that congressional leaders, including Republican leaders, will propose and soon vote on a two-week stopgap funding bill that will fund the government through December 21; conservatives worry that such a tight deadline before Christmas will make it difficult to secure $5 billion in border wall funding.

The new interim spending bill would fund the remaining seven government spending bills through 11:59:59 pm et on December 21.
The Senate expected to follow suit, likely on Thursday, according to a senior source.

Hice told Breitbart News that Republicans “need to deliver” on their commitments to funding the wall and securing America’s southern border.

“The President has repeatedly insisted on $5 billion for border wall funding, and I support his position to build the wall and secure our border,” Hice told Breitbart News. “Republicans are committed to building the wall, and we need to deliver on those commitments – and that should be part of the first train rather than the sleeper car, but the most important thing is that it leaves the station.”

Further, other conservatives and their staffers on Capitol Hill caution that such a close deadline to the Christmas holiday season may make securing Trump’s $5 billion in border wall funding more difficult as many rank-and-file members will feel more pressure to accept Republican leadership’s proposal closer to Christmas.

A senior conservative aide told Breitbart News on Tuesday, “No member wants to be in Washington working on funding the government the weekend before Christmas. A December 21 deadline puts pressure on rank-and-file members to accept whatever leadership is selling them so they can get home to their families. From a leverage standpoint, it puts power in the hands of a few in D.C. who support the status quo.”

Congressman Hice’s comment arises as House Minority Whip Steny Hoyer (D-MD) said on Tuesday that Democrats could give President Trump up to $1.6 billion so long as much of the spending goes toward border security, not building the wall.

“The $1.6 billion … the language is broader than just a wall, so I think that that could probably be agreed upon, which was a figure in the Senate bill,” Hoyer said.

Hoyer then told reporters that he could he could help draft border security language in such a vague manner to appease most of his Democrat caucus.

The Senate Homeland Security appropriations bill, which was reported but never brought to the Senate floor, includes $1.6 billion for “approximately 65 miles of pedestrian fencing along the southwest border in the Rio Grande Valley Sector.”

Senate Minority Leader Chuck Schumer (D-NY) said that they could support up to $1.6 billion in border security, not border wall funding, “that was included in a bipartisan Senate bill.”

Trump noted in a tweet on Tuesday that a wall on America’s southern border will pay for itself within two months.

“Could somebody please explain to the Democrats (we need their votes) that our Country losses 250 Billion Dollars a year on illegal immigration, not including the terrible drug flow,” Trump wrote on Tuesday. “Top Border Security, including a Wall, is $25 Billion. Pays for itself in two months. Get it done!”

Could somebody please explain to the Democrats (we need their votes) that our Country losses 250 Billion Dollars a year on illegal immigration, not including the terrible drug flow. Top Border Security, including a Wall, is $25 Billion. Pays for itself in two months. Get it done!