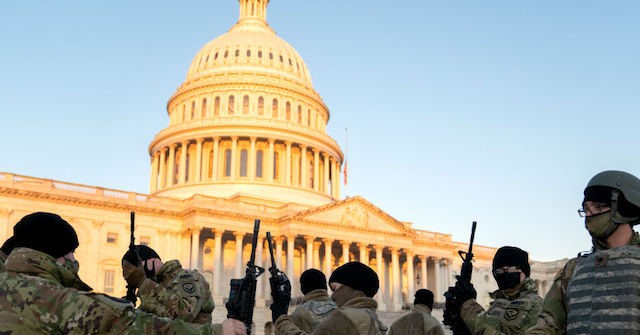 Murphy introduced legislation — the Guard Our Border Act — last Tuesday to reassign 95 percent of national guardsmen currently deployed in the national capital to the southern border.

Democrats and the broader left regularly claim the existence of a “domestic terrorist” threat against them driven by conservative politics and “white supremacy.” They have framed the deployment of national guard troops to Washington, D.C., as a “security” response to the so-called “insurrection” on January 6.

Murphy said, “Nancy Pelosi and her crew have built a fortress around Washington, D.C., for no reason whatsoever. The Capitol Police have said there are no credible threats, but unfortunately now we still have ten feet of razor wire. … We have 2,200 national guard that are standing out in the cold and the rain guarding us against something that doesn’t exist.”

He continued, “But at the same time, several thousand miles away, we have a crisis at our southern border because Biden said, basically, open up the doors, come on in, we’re going to bring you in — and then now, as of last week — we’re going to offer you amnesty.  The Border Patrol is being overrun, facilities are over capacity, and it’s a crisis at our border.”

He remarked, “Why don’t we do something that’s actually smart? Why don’t we take the National Guard that are stationed around Washington, D.C., guarding nothing, and take them down to our southern border where they’re actually attending to a crisis, and I don’t care what Biden says [or] doesn’t say, or what his administration accidentally says, it is a crisis of humanitarian proportions. This is why we use our National Guard, so let’s relocate the ones that are in Washington, D.C., take down the razor wire, and move them down to our southern border.”

“The National Guard was founded with the idea of responding to national emergencies, national crises, and that’s what they’ve done, historically, when there are floods, hurricanes, et cetera,” Murphy added.

Murphy remarked, “We spent, by all accounts, over half a billion dollars so far in Washington, D.C., guarding something that doesn’t need to be guarded. … We’re spending that money to keep up Pelosi’s perpetual wall and instead of down at the border, where we should be actually putting in policies that make sense.”

“The real winners at our southern border the drug cartels,” he said. “They’re pushing so much more drugs across our borders, now because our border [and] customs folks are overblown. They can’t handle this. [Drug cartels] are pushing cash, they’re pushing human trafficking to an extent we haven’t seen before, and reports are that up to a third of the women coming across in the border have been abused.”

“These are people — and their children, especially, the unaccompanied minors — they’re going to be sold into what is essentially slavery in return for safe passage here in the United States,” he added.

Pollak asked if the Biden administration’s tacit acceptance of illegal immigration is part of a broader strategy to change American demographics for partisan political advantage.

“I don’t think [that is] conjecture,” Murphy replied. “I think it’s reality. I think they’re definitely planning on that.”

Murphy contrasted the Biden administration’s contradictory public health policies applied against Americans with those of migrants seeking entry to the U.S. across the southern border.

“If you fly into this country, you have to have a negative COVID [coronavirus] test, but to run over our borders, we don’t even care,” Murphy stated. “What a contradiction in terms, and so the people here [in North Carolina’s 3rd District] are outraged, as everybody in America should be.”

Murphy concluded, “We’re providing free health care, we’re providing housing, we’re doing all these things for people [illegally entering the country], and now we’re putting folks to come into the border illegally up in hotels. Taxpayer dollars — millions — will be spent for that, so appropriately, they are outraged.”