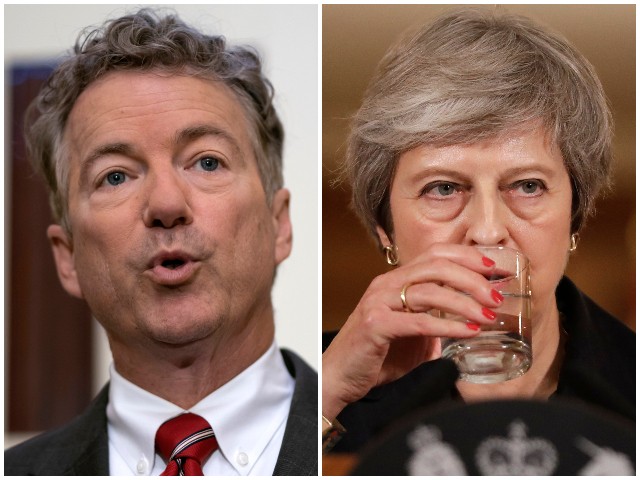 Sen. Rand Paul (R-KY) had a message for the U.K. in an interview with Breitbart News: they would be smart to break away from the heavy regulations of the European Union.

Breitbart News Deputy Political Editor Amanda House asked Paul what message he had for the U.K. after a recent visit to London.

“Regulations stifle the economy, it’s you know the reason why Europe doesn’t have the same kind of degree of growth as we have now because they have too many regulations from the European Union,” Paul explained.

“I think one of the big calls or impetus for getting out of the European Union for Brexit was that they were over-regulated. And I think that’s still true,” he went on.

“I think they’d be smart to make a break with Europe,” Paul resolved, making clear that he did not mean the U.K. should not trade with Europe. “I think it’d be good for them to negotiate trade deals with Europe,” he explained. “But I think the idea of succumbing to some other country or foreign body as far as losing your sovereignty and also subjecting yourself to the regulations is a bad idea.”

Citizens of the United Kingdom first voted to leave the European Union on June 23, 2016. Much of the success in seeing Brexit passed was fueled by Brexit leader Nigel Farage, leader of the U.K. Independence Party and a member of European Parliament. The Tory Party chose then Home Secretary Theresa May as the next Prime Minister despite May’s declared opposition to Brexit. She has overseen the process of negotiating the U.K.’s exit from the E.U. This week she presented a plan that prompted three cabinet resignations. They are not the first resignations over May’s handling of Brexit negotiations.