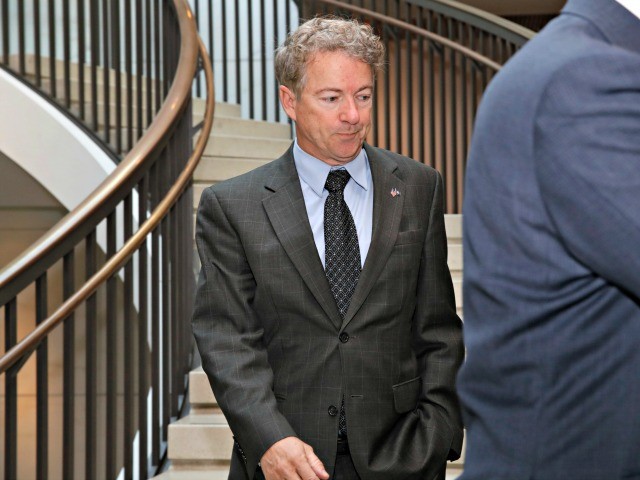 Sen. Rand Paul (R-KY) told Breitbart News it was an “extraordinary moment” when the U.S. Senate on Thursday passed a resolution to invoke the War Powers act expressing congressional disapproval of U.S. backing of Saudi Arabia’s war in Yemen.

The resolution passed 56-41 on final passage, over the objections of many establishment Republicans, but with strong support from conservatives like Paul and Sen. Mike Lee (R-UT), as well as from grassroots leftists like Sen. Bernie Sanders, a Vermont independent who caucuses with Democrats.

“I think it is an extraordinary moment because for decades, maybe for 50 or 60 years, Congress has been relinquishing and abdicating their power to indicate whether the country is at war,” Paul told Breitbart News. “So this is a big step and it is a big majority voting to say you know what? Declaration of war comes from Congress and we don’t approve of the war in Yemen now. So that is a big step and it really came across the aisle, both sides coming together. It’s a pretty big deal…. The historic nature of this being the first time since Vietnam is huge.”

What Paul means is that the U.S. Congress passed into law the War Powers Act in 1973–overriding a presidential veto from Richard Nixon–in the wake of the highly unpopular Vietnam War. The law has never been invoked by either Chamber since the House and Senate overrode Nixon’s veto, but now on Thursday, for the first time ever, the U.S. Senate has by a majority invoked the War Powers Act.

From here forward, Paul said that while House GOP leadership has used rules potentially unlawfully to block consideration of a House resolution the new incoming Democrat leadership on the House side may be friendlier to this cause in January.

“I think the House leadership will block this from coming to a vote–it’s a privileged motion in the House, but the House set up a rule to block the privilege–we’re not so sure it’s even legal what they’re doing but they have blocked the rule for now,” Paul said. “The House turns over to Democrat control in January. We’ll see. There may be a friendlier leadership in January toward this. A lot of it is going to depend on what the Saudis do. If the Saudis could cease fire and try to find peace in Yemen, which would be different than what they’ve been doing, there would probably be less of a push around here to force them to the negotiating table. We’ll see what happens. Some of this depends on Saudi behavior and what unfolds in Yemen. Some of this depends on whether they continue to say their government is staying exactly the same and people responsible for Kashoggi are going to continue to run the Saudi government. That’s going to mean there’s going to continue to be problems.”

Paul believes pulling out of Saudi Arabia’s war in Yemen–U.S. involvement started during Barack Obama’s administration, without approval from Congress–fits with President Donald Trump’s “America First” foreign policy vision, even though the president was against this particular resolution.

“Still when I talk to the president, I hear him saying he doesn’t want to spend good money after bad in the Middle East, in Afghanistan, but I think it’s a conflicting policy in the sense that some of the people who surround him encourage him by saying ‘oh we have to stay or Iran takes over the Middle East,’” Paul said. “I think that’s a far-fetched argument. I think that Iran is largely checkmated by Israel and Saudi Arabia, so I think most of them can defend themselves and don’t require that we be involved in every battle in the Middle East. And, so I do think that it is America First–we have a trillion dollar deficit this year, and there are still things at home that President Trump has talked about, infrastructure and other things that we just don’t have the money for but we would if we weren’t spending $50 billion a year in Afghanistan.”