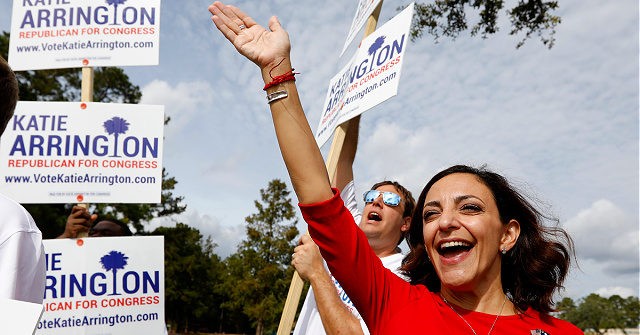 “The South Carolina low country needs to be represented by a true, pro-Trump conservative representative who’s going to stand up,” Arrington said in a phone interview. “The current congresswoman turned her back on the low country. She turned her back on President Trump, and she has not done what we asked her to go up there and do. She’s more about branding herself and becoming a media personality than actually representing the priorities of the district, so we’re going at it to represent the priorities.”

Arrington was previously the GOP nominee for this congressional district in the 2018 midterm elections. With Trump’s support in the primary, she defeated then-Rep. Mark Sanford (R-SC), the former governor of South Carolina who came back in a congressional special election only to then turn on now-former President Donald Trump. Trump endorsed Arrington on election day in the primary in South Carolina, and the brash conservative woman handily defeated Sanford.

But, just a short time after vanquishing the Never Trump congressman in that year’s primary, Arrington was a passenger involved in a deadly car crash. The driver of the other car was killed, and Arrington was relegated to the hospital and eventually a wheelchair for much of the rest of the campaign. The incident pulled her off the trail for months and seemingly allowed now-former Democrat Rep. Joe Cunningham (D-SC) to slip past her and take the South Carolina seat — a Democrat win for the first time in decades. Mace then challenged Cunningham in 2020, defeating him and swinging the seat back to the GOP.

Arrington told Breitbart News in what was her first interview in nearly four years since the end of the election in 2020 that she is feeling “fantastic.” Her campaign launch video, which she provided to Breitbart News exclusively ahead of its public release as well, shows her up and walking around — having made a full recovery from the 2018 accident.

In the ensuing years, Arrington worked in the Pentagon as a career national security official under both the administrations first of Trump and then of Democrat President Joe Biden, whose leftist team relentlessly targeted her because of her loyalty to Trump.

“Thank you for asking how I am — I am doing fantastic,” Arrington said. “Spending your life running around the Pentagon for three years, you get run back into physical condition with the concrete floors — and something around 22,000 steps a day. I am in great physical condition. I agree with you — it’s the way of the Democrats. Joe Cunningham, in 2018, said, ‘oh, I’m not going to fundraise while she’s in the hospital out of respect.’ That absolutely was not the case. It was heartbreaking to recover from that. The loss is on me, I don’t make mistakes twice, and the missteps that were made in that campaign will not be made in this campaign.”

Arrington has also hired Axiom Strategies, the political consulting firm run by GOP strategist Jeff Roe and Kristin Davison — the team that helped elect Virginia Gov. Glenn Youngkin — something she says is a sign she is ready to win. Ethan Zorfas from Axiom, who led the 2020 U.S. Senate campaign for Sen. Tommy Tuberville (R-AL), will overseee this race.

“I’ve hired a national company, Axiom Strategies, to come in and help run this campaign and take on this mighty task. But taking on an incumbent doesn’t bother me,” Arrington said. “Nancy Mace doesn’t bother me. I know what I bring to the district. I see what she hasn’t. In 2018, I was sidelined by the accident — and not many people realize this, but three weeks after the accident, my mother passed away. It was just really hard to come back from all that financially, with people thinking it was a sure thing. I think that’s one thing Americans and especially conservatives have realized, which is: We really need to make our voices heard. We need to do that through donations. We need to do that through grassroots efforts to maintain the integrity of the Republican Party because people like Mace up in D.C. — they’re waffling. She’s a lot like Mark Sanford in that she votes for what’s best for her, not what’s best for the district.”

Arrington, both in her interview with Breitbart News and in her campaign launch video, ripped Mace for a number of misguided moves including Mace’s push to legalize marijuana. At one point in the video, Arrington even jokingly asks of Mace, “Is she high?” Arrington said her time in the Trump Pentagon prepared her to take on the issues she says voters in South Carolina’s first district want to see their member of Congress focused on.

“Being inside the belly of the beast in the deep state for three years, and working for the vast majority of that during the Trump administration and actually seeing things getting done — I worked on Operation Warp Speed, I worked on the COVID pandemic directly with the president and I can’t say enough about those people — what Biden has done in the past year and watching Nancy Mace absolutely apoplectic up there in D.C., I had to run,” Arrington said. “There are things we absolutely need to get done. We have a congresswoman who’s not paying attention and who’s not using any of her self-branded media time to talk about inflation, to talk about border control, to talk about the huge gas prices. All she’s worried about is taking selfies with Carol Baskin. She’s going out to Monkey Island and trying to legalize marijuana, which undercuts what the state — Tom Davis, here in South Carolina — has been trying to do for a long time with medical marijuana. She is not prioritizing this district at all. That makes me really need to get up there.”

She also ripped Mace for a tendency to “side with Democrats” and for using her congressional perch for things like taking selfies with Carol Baskin of Tiger King fame and getting herself booked on leftist television networks like CNN.

“Hey all you cats and kittens!”

“Nancy tends to side with Democrats and politicizing my role as a senior executive service member who was serving this nation, they made it really, really difficult,” Arrington said. “They [the Biden administration] held onto my clearance and I had to sue them. It was a gut-wrenching decision to make. She should be scared. Nancy has not fulfilled her promises. She has never been a representative. I served with her in the statehouse in South Carolina and have watched her as a congresswoman. She is always looking for her next job. She’s not focused on what she needs to get done at home. That’s what I do — I get things done at home. She should be afraid. I intend to go to Congress and get things in line. We need some sanity up there, don’t you think?”

Arrington also ripped Mace for voting to hold former Trump adviser and former Breitbart News executive Steve Bannon in contempt over the January 6 nonsense, which she did last year.

“What we need in Congress are strong, conservative Republicans that are going to be for President Trump’s America First agenda first and foremost,” Arrington said. “I worked on the pandemic on the supply chain, I worked in the Department of Defense on our supply chain. We’ve got to take Americans and make sure we’re the priority, not the world. I talked about that in the previous campaign and it hasn’t changed. That needs to be priority one. We need to work on getting this inflation under control. The Biden administration, and how they’re looking at it, they just want to give people more money — no, that’s not how it works. We have got to get this under control. You look at this horrendous deficit and what my grandchildren are inheriting because people like Nancy Mace are willing to vote yes with the Biden administration instead of having a backbone and standing for what conservatives believe in — that’s family, protecting the unborn, and making sure our borders are secure. There is absolutely a ton that needs to get done and it’s sad to see the RINOs going and voting like Mace — going and censuring Steve Bannon. Why? Do we not have enough crises in the world that we need to have somebody who goes into office to go vote with the Democrats to start censuring and subpoenaing the free press? That’s not what we elected. That is not what we are about here in SC-1, I can tell you that.”

A local news report from the conservative Fits News, while forecasting a likely run from Arrington, predicted Trump is likely to endorse her if she gets in the race — as she is now doing. Trump has formally called for a primary challenge to Mace, and while he has yet to weigh in, Arrington said she hopes he will endorse her.

“President Trump is a very busy man, keeping the momentum of the GOP going and the fire in the belly of the true conservatives,” Arrington said. “Thank God for him, Melania, and their family. They truly are American heroes in my eyes. They have not given up. I can only hope for an endorsement from President Trump. I hope he sees what I did in the Department of Defense for America to make sure we have the best in cyber security and national security over the past few years and what we did on the pandemic over the last few years to make sure we had the supplies that we needed and the security of Operation Warp Speed to make the vaccine available to whoever wants it. I sure hope he would endorse me, but we will see. I’m running because the first congressional district needs a true conservative and not somebody who is going to side with Biden on silly things and go out and propose legislation that is not in line with where the priorities of this district are.”

Former South Carolina Gov. Nikki Haley, who served in the Trump administration as U.S. Ambassador to the United Nations, again crossed Trump this week when she endorsed Mace’s reelection bid. This battle, assuming Trump does get behind Arrington, would prove to be the ultimate proxy war for control of the future of the party between Trump and his allies and the more anti-Trump establishment forces seeking to regain power.