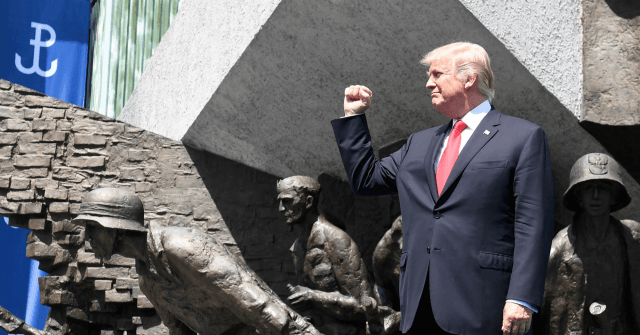 The Law and Justice Party (PiS) politician, best known outside Poland for his viral clash with Canadian psychologist Jordan Peterson’s media sparring partner Cathy Newman (of “so you’re saying” infamy) over illegal immigration, told Breitbart News that his country’s elections on Sunday are part of a wider battle between populist-leaning national conservatives, including America’s Donald Trump and Hungary’s Viktor Orbán alongside his own party, and establishment globalists.

“We have to beat them in this election… politically they know that we are in a very strong alliance with Mr Trump,” Tarczyński explained.

“Poland and Hungary will take over politically in Europe [from Germany and France], I believe, and then we’re going to support Mr Trump,” the lawmaker predicted, giving a sense of the international stakes for the self-proclaimed “centrists” who currently hold sway in the European Union’s centres of power, and for their political fellow-travellers on the American left.

Bond Between America and Poland ‘Stronger Than Ever’ Thanks to Trump, Say Ambassadors https://t.co/TAEM9cUSiU

“There are over 15 million Poles in the U.S., and in huge numbers they will support Mr Trump, so this is a huge political game,” Tarczyński continued, underlining the left’s fear of having pro-borders, pro-sovereignty governments on both sides of the Atlantic, with leading “centrists” such as France’s Emmanuel Macron and Germany’s Angela Merkel squeezed between them — and facing increasingly dissatisfied electorates at home.

“They are just so afraid of what will happen if Mr Trump will win in 2020 — and he will win, I’m absolutely sure that he will win,” he said.

In late 2018, the Polish ambassador to the United States and the U.S. ambassador to Poland penned a joint article declaring relations between the two countries were stronger than ever thanks to the shared outlook of the Trump Administration and the Law and Justice government on so many issues, particularly illegal immigration.

Since then, the Polish government has invited American forces based in a Germany which is politically hostile to President Trump and delinquent on its NATO spending obligations to relocate to Poland, and the presidents of the two countries have signed an agreement to grant each other’s citizens visa-free travel rights.

“They’ve been trying to get this for many, many decades and I got it for the Polish people, in honour of the Polish people in the United States and in Poland,” President Trump said at the time.