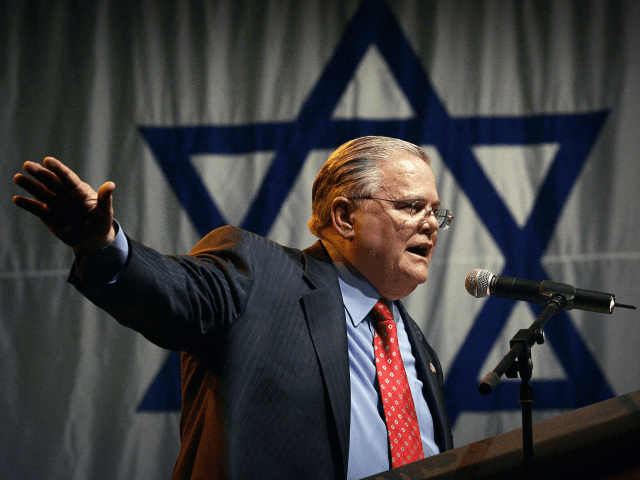 The U.S.-Israel relationship has never been stronger than under the current leadership of President Donald Trump, declared Pastor John Hagee, founder and national director of Christians United for Israel (CUFI).

“CUFI could not be more delighted with President Trump for all of the wonderful things he has done for the state of Israel,” said Hagee, who hosts a national Christian television and radio program and is founder and senior pastor of Cornerstone Church in San Antonio, Texas.

The U.S.-Israel relationship has never been stronger because of the devotion of the president to the state of Israel.  From moving the U.S. embassy to Jerusalem to crushing the Iran nuclear deal, it is clear that President Trump keeps his promises and is committed to ensuring America’s allies that we are connected to Israel and those that attack Israel would be actually attacking the United States of America.

Hagee was speaking on this reporter’s Sunday night talk radio program,  “Aaron Klein Investigative Radio,” broadcast on New York’s AM 970 The Answer and NewsTalk 990 AM in Philadelphia.

Listen to the interview below:

Hagee said that his organization, CUFI, was met with a highly receptive audience in the Trump administration when it came to support for declaring Jerusalem the capital of Israel; pushing the Taylor Force Act, which sanctions the Palestinian Authority over its monthly stipends to the families of Palestinian terrorists; and defunding the controversial United Nations Relief and Works Agency (UNRWA).

“We have been able to accomplish under the leadership of President Donald Trump what has not been done from the former six presidents before him,” said Hagee. “It would be impossible to say that we could have expected more from Donald Trump.”