More than two dozen House Republicans are asking the Biden Pentagon where its report is on the status of American taxpayer-funded military equipment the Biden administration left behind in Afghanistan after the agency missed its deadline two weeks ago, Breitbart News has exclusively learned.

In a letter led by Rep. Andy Barr (R-KY) and sent to the Department of Defense on Friday, the 28 House lawmakers wrote to Defense Secretary Lloyd Austin:

We write to you with deep concern regarding the U.S. Department of Defense’s (DOD) non-compliance with Congressionally mandated reporting of United States property, equipment, and supplies left behind after the disastrous August withdrawal from Afghanistan. The DOD is over two-weeks late on its reporting deadline, totally disregarding Congressional accounting of taxpayer funded equipment abandoned by this Administration and left in possession of the Taliban.

During the Biden administration’s chaotic and disastrous U.S.-led withdrawal from Afghanistan in August, the military was forced to leave or destroy billions of U.S. military equipment it was using in the country or had tried to hand over to the Afghanistan government before the Taliban took over the country. Hundreds of Americans and green card holders were also left behind enemy lines as the administration pulled all troops out. 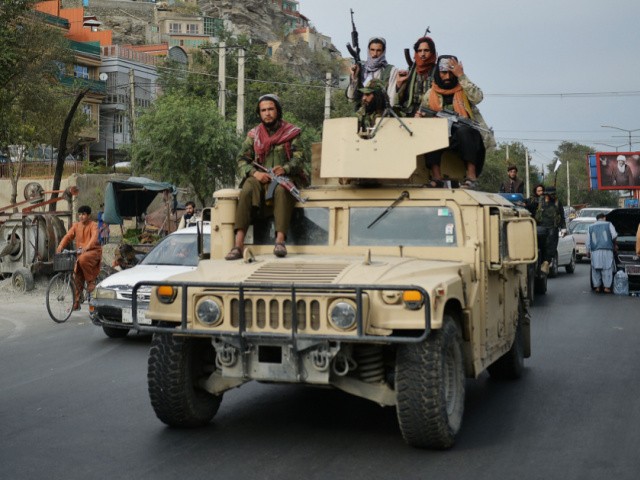 Legislation passed in September required the defense secretary to submit a report to Congress within 90 days of a report on the status of U.S. equipment provided to the Afghanistan National Security Forces as well as the future plans regarding any such items.

The lawmakers added in the letter, “As you are likely aware, the 90-day deadline for this report came and went on December 29, 2021, without the required report from DOD.”

Barr said in a statement:

Months after the Biden Administration’s humiliating surrender in Afghanistan, we have yet to receive a full and accurate accounting of the military weaponry, equipment and property left in the hands of Taliban terrorists. It is bad enough that at least 470 Americans were left behind enemy lines after the withdrawal on August 31. I am calling on this Administration to fulfill its obligation under the law, and provide transparency on this disaster immediately.

They also noted in the letter that Chairman of the Joint Chiefs of Staff General Mark Milley testified on September 29, 2021, that terrorist groups in Afghanistan could reconstitute in the “not too distant future.”

“It is with gravest concern that even after a three-month window to produce the required information, the DOD still has not given Congress an accurate accounting of United States equipment still in Taliban-controlled Afghanistan where terrorist groups are reconstituting,” they said.

“This lack of information prevents Congress from being able to accurately and effectively conduct oversight over the tens of billions of dollars of equipment invested in Afghanistan over the past 20 years and creates vulnerabilities in our national security,” they wrote.

Barr, who is a member of the House Foreign Affairs Committee, was the first lawmaker to call for the resignation of President Biden’s entire national security team after the botched withdrawal from Afghanistan that left 13 U.S. servicemembers killed.