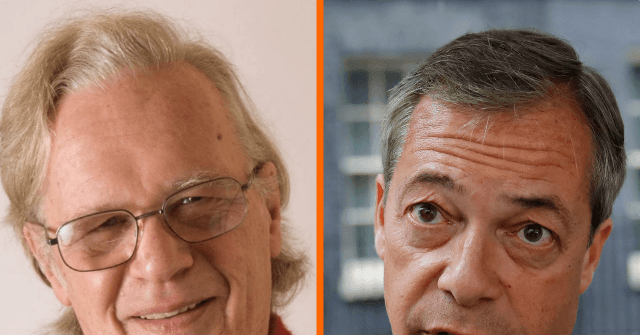 STRASBOURG, France — Brexit Party leader Nigel Farage has paid an emotional tribute to his friend Christopher Booker, praising his contribution to the Eurosceptic cause and much else besides.

“Booker, wow! What an amazing man. I can’t think of anyone I’ve ever met who had such a broad range of knowledge on so many subjects, it was so extraordinary,” said Farage of the esteemed eurosceptic columnist, who served as founding editor of satirical magazine Private Eye in the 1960s.

“Architecture, history, art, music, politics, current affairs. He looked at everything with a satirist’s eye.”

Please mourn for Christopher Booker, who has died. Christopher was a good friend as well as a superb journalist, whose courage and deep knowledge have never been more needed than they are now.

“Personally, in the 1990s when UKIP was nothing more than a tiddler this literary giant attached himself to me and came and spoke at village halls and town halls with me all over the country,” Farage recalled.

“And when I first came to [the European Parliament] in 1999 as an MEP, Booker was one of the top two or three people in sponsoring me to get here.”

Mr Booker, who passed away after a short illness aged 81, continued to pen his long-running Sunday Telegraph column until almost the very end, challenging the establishment and the conventional wisdom on an enormous range of topics including not just Britain’s membership of the European Union, but also the conception of climate change as a phenomenon driven by man-made global warming, the secretive and overbearing behaviour of the country’s family courts, and much more.

“The passing of a great figure,” said Farage.

“Someone who actually came from a liberal tradition, not somebody you’d consider to be on the right. He questioned things. He questioned whether Co2 was actually leading to climate change, he questioned all the attempts to shut down free speech and open debate.

“And those columns that he wrote and published in the Sunday Telegraph in the 1990s alerted people to the fact that free market capitalism was under attack, that giant corporates were in control of the world,” he added.

“To me, if I think of the top ten people who I met in my life who I so thoroughly enjoyed time with, always intellectually stimulated me, and made me laugh too, Booker is absolutely in my top ten.”

Christopher Booker has died at the age of 81. In 2014, he wrote in The Spectator about how the first world war inspired the EU, and why its supporters won’t tell you: https://t.co/rWzW9eH7xv