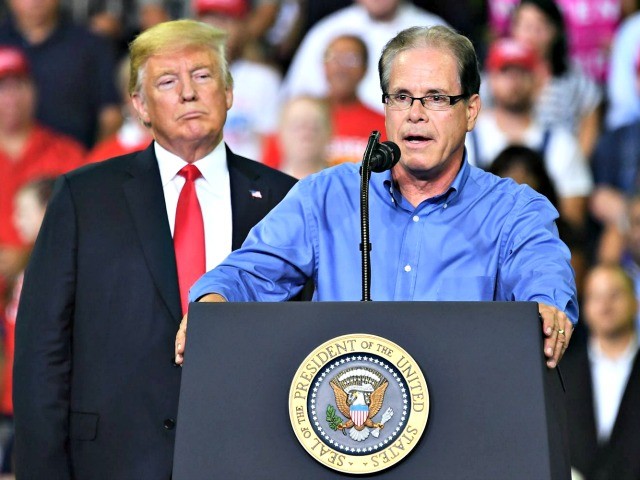 Sen. Mike Braun (R-IN) told Breitbart News in an exclusive interview on Monday that “enough is enough;” it is time to secure America’s southern border, and the Democrats’ plan is “basically no border security. Period.”

Braun’s victory against Donnelly, as well as Trump’s double-digit victory in the 2016 presidential election, suggests that Hoosiers want to secure the country’s southern border and end illegal immigration.

Braun, who campaigned in Indiana with President Trump several times over the 2018 midterms, told Breitbart News that border security was a top priority for Hoosier voters.

“I think in Indiana, border security was right up there with jobs and the economy. I think the cost of health care was too when I campaigned. I’m disappointed that we’re just talking about $5.7 [billion] when it’s going to take more than that to really address it and to make sure that we have a secure border and promote legal immigration the way it’s always been,” Braun told Breitbart News. “It’s always been on the part of the Democrats, where everyone agrees on what we ought to do, the president is calling their bluff, and they’re digging in politically.”

Former red-state Democrats, such as Sens. Donnelly and Heidi Heitkamp (D-ND), shocked voters as they relented on their pledge to back Trump’s partial border wall funding and instead voted against advancing the Republican spending bill that contains $5.7 billion in border wall funding.

The Indiana senator said that many red-state Democrats use “political calculation” to get elected. Meanwhile, Sen. Braun has signed a term limit pledge which allows him to focus on representing Hoosier interests in the Senate, especially on immigration.

Sen. Braun said, “It says they’ll do everything with political calculation so, get elected then come back into the party fold with some convenient excuse. I think that’s really a turnoff I know Hoosiers have with the federal government. It’s one of the reasons I decided to run; I have the blessing of signing a term limits pledge and hopefully we’ll have more steadfastness than most politicians here.”

The Hoosier businessman said that he thinks that “Indiana is a law and order state that believes in simple things like a border that should be respected and secured.”

Sen. Braun charged that he believes that securing the border and tackling illegal immigration ranks as a top issue for Hoosiers and GOP voters.

President Trump announced on Monday that he will deliver a prime time address on Tuesday night on America’s insecure southern border, in which he will explain directly to the American people why the country needs border security.

The Indiana Republican said that “enough is enough” and that America needs to secure its southern border.

“I am pleased to inform you that I will Address the Nation on the Humanitarian and National Security crisis on our Southern Border,” Trump tweeted on Monday.

Braun said that Hoosiers “also need something that addresses a lot of the issues due to not having a sound immigration plan. I believe President Trump ran on it and carried Indiana by 19 points back in ’16 and came in several times for me and immigration was always a discussion. When we tried to measure that we were talking about the right things, like I said it was right up with two or three other things, all of equal importance. I think Hoosiers are practical folks… it’s clear that we have a border that is systematically not respected and breached for decades. And enough is enough.”

“I think it’s easier to talk about now than it’s ever have been. It’s reaching a culmination, it’s reaching a boiling point of sort, and I’m interested to see if the Democrats are willing to do anything other than just beleaguer the process. And, you got to remember just two years ago most of them wanted to spend $25 billion and believed in a physical impediment; now all of that is gone and all they propose is $1.6 [billion],” Braun said. “That is a real about-face. I think the real political fishtailing is from the Democrats. It’s going to be on their shoulders to see if they can dig in and keep their plan, which is basically no border security. Period.”